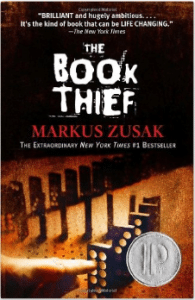 A Classic of War and Redemption, Narrated By Death

In a time riddled with death, war, and hiding Liesel Meminger’s story stands out against the austere backdrop of impoverished Himmel street in Nazi Germany. Death is a very busy entity and above all, curious about the colors that filter the world around him. Entranced by the question: why bother in relation to humans, death has a few stories, some memento moris, that he turns to, seeking understanding of a fleeting yet somehow irresistible race of creatures. Liesel’s story is his prime example. Her diary, his memento. Her life, an answer to some of his questions.

Abandoned to foster care after watching her young brother die on a train, Liesel’s heart is stone, her hopes lying in potential rescue from a mother who never comes. In the wake of death and abandonment, she finds sustenance for her soul in the form of her foster family, especially Hans Hubermann, who opens the world of reading and imagination to her. Plagued with dark dreams, Liesel encounters the wonders and mysteries of fiction as the führer grows in strength and Hans confronts a past promise and the desire for humanity in the face of genocide.

Now hiding a Jew in their basement, Liesel and her foster family must confront the meanings of hate, hope, love, redemption, and the ultimate unfairness of the surrounding world. With her hard growing up stalked by impoverishment, rations, and the potential of being found and captured for the carefully hidden basement secret, the only form of release is the sweet vice of theft and what better to steal than books from the mayor’s massive library.

Etched with startling prose, death provides narration that can only be timeless. Superseding the omniscient viewpoint, time and chronological progression is immaterial. The human soul is the focus here, the manner in which hardship is met by the few who see beyond the accepted into the realm of true choices: good or evil, humanity or conformity.

A sleeper war-time epic, the novel takes a look at the rise of a hate-filled society from the prospective of an abandoned girl, wrenched from innocent childhood before it even starts, and yet the very harshness of the content is offset by a certain sentiment – maybe death’s odd moments of pity, his desire for things to turn out differently as he watches, waiting in the wings.

While death carries the souls away, the living remain very much a product of the world around them, heightening the narrative sense of tension. The actual thieving itself has the quality of a strange redemption, the mayor’s wife an elusive adult figure of brokenness who serves as a warning and a mark of compassion.

With a descriptive narrative style that is none-the-less down to earth, Markus Zusak captures the essence of youth from the teasing, the daring, the love, and the unrequited nature of true life. A novel projected toward a teen audience which captured adult fandom and made the New York Times bestseller list, The Book Thief goes beyond the bounds it set itself. I project that it will someday be a classic and doubtless, required reading for young audiences.

Max, the Jewish prisoner, who teaches Liesel new things through his own books and writings provides the Anne Frank element of despair during the Nazi error, confronting young Liesel with the harsh realities of the corrupt system flourishing around her. Liesel’s best friend, Rudy, and his confrontations with Hitler Youth leadership further signifies characters on the outside, looking into a world which has morphed beyond recognition. How can they survive and yet not become a hateful product of their society? How can Liesel help to save Max and how can she understand the burdens he encounters every night, haunted by dreams in the Hubermann’s freezing basement.

Death provides us with the only possible conclusion – one he has given us early on. He’s not concerned with what happened, but with the how and why of the human spirit, the interiority of the character’s progression. It certainly doesn’t read like a book designated for teens, although Amazon lists it strongly as young-adult fiction (which Google confirms.) The story transcends age barriers just as it transcends time, and while it teaches and provides a necessary moral to the readers, it also immerses, but not just for mere entertainment. These characters feel real, their relationships and interactions real, relevant, and ultimately poignant. The conclusion leaves readers satisfied, the sense of having finished an epic poem, of having come through something and emerged at the other side. It’s not a story that, once read, can ever be forgotten, and I see myself returning to the dog-eared pages many times.

I listened to the complete, unabridged audio CD version as read by Allan Corduner. The experience of having The Book Thief complements the mystical quality of narration. As Death speaks, we actually hear his voice and mark the strange, compelling beauty of his words, sometimes ironic and sometimes poetic. The actual bound copy of The Book Thief provides Max’s illustrations however, meaning that both forms – either reading the story or being read to provide something special.