Books and movies about war can make the most complicated of human circumstances seem simple, black and white, a basic battle between right and wrong.  In some ways, and in some wars, there is truth to be found in the basics, but to stop there ignores the real people whose lives are 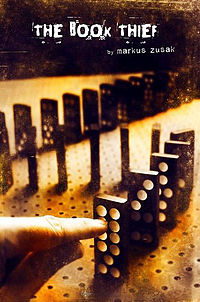 ended, destroyed and forever altered by conflicts in whose creation they had no part.  The Book Thief acknowledges all of those people through the vector of a single small girl living as part of the most highly controversial civilian population in modern history – Nazi Germany.

Liesel Meminger is The Book Thief.  The moniker describes not only her actions but also underscores one of the most powerful themes of Markus Zusak’s touching and highly unusual book – the power of words to hurt, to heal, to change the world.

The Book Thief begins in 1939, with Liesel and her brother traveling by train with their mother to be placed with a foster family.  Their father had been taken away and their mother could no longer provide for them – they were starving.  En route to Munich her brother dies, she steals her first book and Death sees her for the first time.

Death is our narrator.  It seems weird because it is weird.  The Book Thief‘s Death is elusive – not really corporeal, but uses human terms to describe the taking of souls; not omniscient, but certainly able to be in many places at once, seeing and knowing things unknowable to mere mortals; melancholy and exhausted by its job, particularly in times of great cruelty.  WWII made Death grieve, the magnitude of suffering a burden even for a force of nature.  It is through individual stories that Death soothes itself.  One of those stories is that of Liesel Meminger.

Why would Death be so touched by a single child amidst a world of suffering?  Perhaps because through her losses she appeared to it more than just a single time or because she looked upon it without fear.  Whatever the reason, Death tells us of the life of Liesel Meminger, from the ages of 10 to 14, as she endures one of the cruelest portions of human history.

The Book Thief, because of its unusual narrator feels ephemeral as the book begins.  It’s difficult to grasp exactly how Death is going to tell this story and at first it feels slippery and impersonal.  But we come to know Death as we come to know Liesel and the story and characters build and meld until narrator and story seem perfectly natural companions.

Give yourself some time to work your way into The Book Thief.  It doesn’t cheat the reader with simple prose and structure that obscures the complexity and confusion of the German citizenry under the iron fist of Hitler.  Your reward for taking the time to become accustomed to the structure is a beautifully textured, complex portrait of one girl, a small poor neighborhood, a beleaguered populace and the beautiful, terrible, irresistible power of the written and spoken word.  4 1/2 stars and highly recommended.