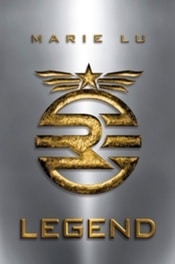 It’s hard to believe, but I burned myself out a little bit on the YA dystopian future novel.  Not that I don’t still adore the genre, but I had to give myself a full week break in the middle of Legend to cleanse my palate of teens saving the blighted world.  And I’m glad I took that break – it allowed me to come back and enjoy the end of the novel properly, which is nice, since it’s pretty good.

The first book in a trilogy (aren’t they all), Legend is told from the POV of two 15-year-old citizens of what used to be the United States.  Now it’s the Republic and the Colonies – and they are at war.  Our  first main character is Day, a young, smart and nimble law breaker who enjoys messing with the Republic’s draconian rules and schemes.  He comes from the poor part of LA, which is most of it, where Republic soldiers do as they please, people scrape by on next to nothing and plagues pop up with startling regularity.

Then we have June, who lives on the other side of the tracks.  She and her brother Matias (their parents died) live in one of the rich sectors with other members of the republics military elite.  June is the only person to have ever gotten a perfect score on the Republic’s “Trials”, which determine where young people will spend their adulthood.  She is a prodigy and treated accordingly.  Day and June’s worlds collide as he goes on a desperate mission to obtain plague medicine for his ill brother.  Neither will be the same after the events set in motion on that ill-fated evening.

Now, I know what you, as an adult reader, are thinking.  Because I was thinking it, too.  How many books do we really need that set up two teenagers to be the smartest, bravest, strongest saviors a bleak future world has ever seen?  Apparently the answer is that we need infinite numbers of such books.  They’re just that hot right now.  What drew me back into Legend after my YA OD was not the characters (though Day is interesting) or the basic plot (it’s just like all the others) but the world building.  Like Veronica Roth and Suzanne Collins before her, author Lu creates a future that is, for all its clichéd bleakness, eerily possible.  We don’t yet know what happened to the United States, but the condition of the landscape and city suggest that global climate change had something to do with it.  I’m willing to put up with the juvenile romance and perfectly perfect characters to find out the details of what happened to this world.

I don’t think Legend is as strongly written or plotted as either the Divergent (aside from the final installment) series or the Hunger Games series, but it does have its strengths.  I won’t be rushing out to buy book #2, but should it happen to cross my path I’ll certainly read it to find out more about the rebel Colonies and the disasters that surely led to sure dire circumstances.  I do fear that the characters are not interesting enough to hold up the story, so only give Legend 3 stars out of 5.  But I definitely recommend it to avid readers of the genre.