Well, that was a whirlwind!  When I picked up Maria Semple’s Where’d You Go, Bernadette at the library I didn’t realize it was a 2 week loan.  By the time I started it, I had 4 days left.  I finished with time to spare.  Some books just grab you by the throat and drag you along for their eccentric ride. 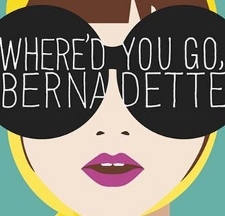 Where’d You Go, Bernadette tells the story of, wait for it, Bernadette!  She is a Seattle housewife and mother of one very precocious teenage daughter, Bee.  She is married to Elgin Branch, a big shot at Microsoft and spends her time doing, well, a whole lot of nothing, really.  Most of the book consists of emails, letters, faxes, notes and other communications between Bernadette and others as well as between others on the peculiar subject of one Bernadette Fox.  The rest of the story is told from the first person perspective of young Bee.

We enter the book as Bee is preparing to graduate from her Seattle private school and head off to boarding school back east.   She has another full semester at her current school but her perfect grades and stellar academic qualifications have earned her a place at her mother’s alma mater – Choate.

Meanwhile, Bernadette is coming unglued.  Well, maybe I should say *more* unglued.  She’s always been odd, eccentric, unusual, whatever you want to call an artistic personality with both talent and focus – none of which are being used.  Her problem is that she hates Seattle – both the city and the people with whom she has to interact.  And they hate her.  She and Elgin bought an old, dilapidated school for wayward girls high on a hill with the intent that it would be Bernadette’s project to rehab the house.  She didn’t.  Now it’s falling apart and she’s so wrapped up in the minutia of her unhappiness that she doesn’t even see it anymore.

The family is planning a trip to Antarctica – at the special request of Bee – over the upcoming holidays.  Elgin and Bernadette promised her whatever she wanted if she maintained perfect grades throughout her schooling and she has done just that.  The trip is her gift.  Bernadette most emphatically does not want to go, as she explains to the virtual assistant she has hired (from India) to take care of any and all errands that do not explicitly require Bernadette to carry them out in person.  In our world, that’s most everything, especially if money is no object.   What we do is watch a slow motion train wreck as Bernadette and Bee and Elgin finally fall apart.

The beautiful thing about this book is that Bernadette is smart and funny and completely wacko.  We like her even though she complains incessantly and is basically just slowly going nuts.  She loves her daughter with her whole heart – and her husband – and has magnified some events in her past to the point that they present insurmountable obstacles to her approaching any sort of happy peace with her life in Seattle.  As we learn more about her, we come to understand why Bernadette is, simply, Bernadette – and why she has so badly failed to thrive in the Pacific Northwest.

We also come to know and love Bee as her devoted daughter.  Not that Bee doesn’t have some of the usual adolescent “I hate my parents” moments, but she is not a regular little girl.  She’s extremely smart, very empathetic and understands her mother on a level that even her father fails to achieve.  It doesn’t matter what other people say – Bee knows that her mother is fabulous in every way.

I enjoyed Where’d You Go, Bernadette from cover to cover.  It’s a slender book and a lightning fast read during which author Semple manages to develop characters using their own words and juxtaposing them with the words of others talking about the same incidents.  She doesn’t fall into the multiple narrator trap of repeating herself too much, using the technique for the far more interesting purpose of showing how little people really seem to be aware of how their actions affect others.  Bernadette and Bee (and to a lesser degree Elgin – he constitutes the one weak point in the book because he just doesn’t remain as consistent in his motives as the others) are delightful and quirky and weird and lovable, even when one or both of them is falling to pieces.  We want them to be okay, to somehow pull it all back into a life in which everyone can be happy.  It’s definitely not just regular chick-lit – it’s clever and witty and poignant without being overly sappy.  Definitely recommended.  4 stars out of 5.