Does she see dead people? 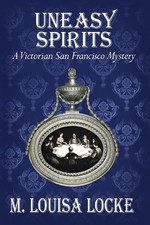 There are things we expect from cozy mystery-type series.  Intrepid heroes or heroines, amateur sleuthing, wacky family members and sidekicks and a healthy need to suspend disbelief that non-detectives could so successfully detect.  It’s a rare and wonderful thing to find a series that feels like a cozy but has characters who feel real and grounded – and stories that even shed some light on a piece of history or two.  Uneasy Spirits is the second in M. Louisa Locke’s Victorian San Francisco Mystery series and is just as delightful as the first, Maids of Misfortune. Both successfully combine historical fiction and cozy mystery and end up being quite special.

Uneasy Spirits brings us back to the world of Mrs. Annie Fuller, a young widow who runs a boarding house in San Francisco.  The year is 1879 and Annie occupies a rare and rather lonely place in Victorian society – the middle.  She is self-supporting, owning the boarding house and working on the side as the fortune-telling Madam Sibyl (the only way for a woman of Annie’s significant business acumen to acceptably give financial advice to upper class men).  She is parts of both the working class and the upper class, depending on who is making the assessment.

As we meet Annie again, the events of the previous book are some months in the past and she has been asked by one of her boarders, who all know of her Madam Sibyl identity, to look into the possibly shady dealings of a couple of mediums.  As Annie attends séances, has private sittings and generally snoops into the world of spiritualism she begins to question her beliefs about the spirit world as well as her fabrication of palm and astrology readings in her role as Madam Sibyl.  She also stumbles into a larger mystery than she could have imagined.

Back is author Locke’s lovely period setting, with attention paid to the customs of the day whether it be in practical interactions or having one’s heavy skirts make is difficult to play sleuth.  Victorian San Francisco is portrayed with affection and a great eye for detail in descriptions of the city’s streets, neighborhoods, buildings and shoreline.  Sliding in again are social issues including women’s rights, political corruption and the fragility of even the most upstanding reputations.  As Annie delves into the spirit world we also get a glimpse of a bit of, perhaps, the supernatural, as well as a very interesting look at how grief, trauma and mental illness were treated and manipulated at the time.

Annie is once again our main character – independent, thoughtful, hardworking and caring to a fault.  Her past still haunts her and we learn more about her marriage and the death of her husband.  She chafes against some of the rules of the society in which she lives, but is not an anachronistic 21st century heroine plopped down in 1879.  She is every bit the proper Victorian woman, having become in some ways different from her peers only through hardship and misfortune.  Handsome suitor Nate Dawson is also back, though the relationship is suffering growing pains as Annie finds herself in the middle of yet another dangerous situation.

Peripheral characters including young maid Kathleen, cook Beatrice and boarder Esther Stein are all very much in attendance, with their level-headedness helping Annie sort through the complexities of not only her current investigation but also her day to day routine.  I really like that these characters are not quirky hindrances to our heroine but rather earnest helpers who genuinely care for Annie as well as for the well-being of her business ventures (and her love life, of course).

What I like best about Uneasy Spirits is that Locke presents both a solid piece of historical fiction (down to pertinent quotes from the 1879 San Francisco Chronicle at the beginning of every chapter) and an intriguing mystery.  Annie and Nate become increasingly well developed and likable as we follow their non-traditional and sometimes fumbling courtship.  There’s general skullduggery, a little romance, fun historical detail and a cast of characters in whom we grow increasingly invested.   All in all a fun and satisfying read and a series I look forward to continuing.  4 out of 5 stars and a strong recommendation for anyone who likes cozy mysteries, the Victorian time period or is simply looking for an engaging series with likable characters.