Days Are Gods, The 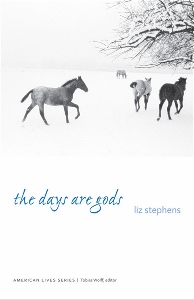 As hard as it is to believe, aspiring writer Liz Stephens isn’t completely satisfied with her current career providing snacks on the set for a commercial production crew in Southern California.  While sweating and toiling to make sure that the “Taco Bell people” are happy with their 30 second product, Stephens dreams of something more.  Almost on a whim, she and her new husband pack up, leave Los Angeles behind, and courageously head to the remote mountains of northern Utah – at the other end of the cultural universe.  Chaos, turmoil and heartbreak ensue as the author tells her story in The Days Are Gods.

Wellsville – home to about 3,000 upstanding, mostly Mormon, individuals – lies in the remote outskirts of Logan, Utah, which is home to Utah State University, where Stephens has been invited to pursue her Master’s degree and teach undergraduates.  Having done her research, she’s not surprised that the “couple from California” is regarded with a combination of suspicion and curiosity by the Wellsville locals and she’s fully committed to make the effort necessary to try and fit in to her to her new and starkly different social world.  Whether she actually succeeds is a complicated question, although she manages the wardrobe changes with considerable aplomb. 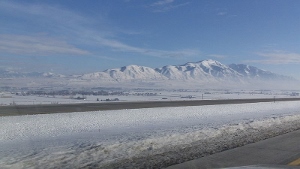 What she’s not so prepared for is the impact that the natural world has on her.  From the constant “postcard perfect” mountain vistas to the life and death struggles of the many animals she surrounds herself with – dogs, chickens, horses and goats – she gets a lot of existential mileage from her many exploits.  She frequently writes beautifully, although her almost manic enthusiasm caused this reader to have to set the book down for a break occasionally.

There are two types of memoir.  Those written by someone who has done something unique and extraordinary and those written by someone with a basically ordinary life.  This book falls in the latter – more challenging – category.  Given that millions of people have experienced the trauma of moving to a completely different environment – often times a much more daunting one than this – it takes a special kind of courage to write about it.  Fully aware of the difficult task she has in front of her, she packs a lot between the covers of this slim volume.  It seems that she has so much to say about life, death and her unending struggle between the two that her basic storytelling skills falter at times.  But overall, Stephens manages to craft something distinctive and interesting out of what appears to be entirely mundane on the surface.

More than just your typical “fish out of water” story, The Days Are Gods is an insightful, frequently passionate, look at a few years in one woman’s unique life.  I don’t read “existential middle aged female non-fiction” too often and I can’t say that this book changed my life, but I’m happy to recommend Stephen’s book to anyone who likes reading a well-written personal story.