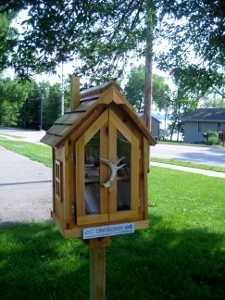 A beautiful summer morning beckoned and one particularly challenging Little Free Library had been calling my name, so I set out a few Sundays ago for my most demanding library adventure yet.  Kitted out in my usual cycling gear along with a newly designated book tote bag, I left town heading north with a generous wind at my back.  After a couple of hours of pedaling through the beautiful rolling countryside – sighting numerous sandhill cranes, turkey vultures and aggressive red-wing blackbirds – I arrived in the small burg of Okee, which is “famous” for only one thing.  It’s the eastern terminus of the Merrimac Ferry, the most entertaining way to cross the Wisconsin River on wheels.  Chatting with another cyclist while waiting, I soon was aboard the Colsac III – the current incarnation of the ferry that’s been taking travelers across this part of the river since 1844, four years before Wisconsin statehood.  Chugging along, as I watched the bluffs go by, the sturdy vessel arrived on the other side in just a few minutes.

Pedaling into town, I knew I was narrowing in on my goal.  Having consulted the on-line LFL map before I left home, I had a basic idea where I was headed and with a population of 420 – and about three streets – I figured it would be hard to get lost in the quiet, little village of Merrimac.  Turning off of Main Street onto River Street, I spotted it right at the entrance to the baseball park, one of the most attractive Little Free Libraries I’ve seen in a long time, a rustic A-frame with quaint windows, large faux cedar shingles and a charming chimney.

Inside the library, a large array of literary temptations presented themselves, from classics by Henry James and William Faulkner as well as works by best-selling authors like Richard North Patterson, Dan Brown and Janet Evanovich.   Seemingly a requirement at every little library I visit, Mary Higgins Clark was also present, but I was surprised to see a couple books about atheism, attesting to a little more diversity than might be expected in small town Wisconsin.    After a thorough survey of my options, I selected Science and Religion: Are They Compatible?, edited by Paul Kurtz of the Center for Inquiry.   In its place I left Crossing Antarctica by Will Steger, which tells of Steger’s international team of adventurers and their 1990 effort to trudge across the continent without support. 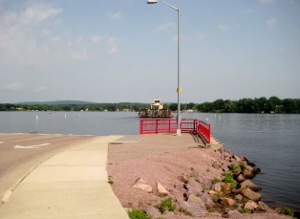 The Colsac III chugging into the dock.

I repacked my tote bag, scarfed down a Power Bar and headed back down to the dock, having just enough time to refill my water bottle before the ferry arrived.   A few moments later I was back on the other side of the river and headed home.  I don’t plan on including a 70 mile bike trip and some form of aquatic transport in all of my future Little Free Library excursions, but a little challenge is a good thing and it’s always fun to combine two of my favorite things:  books and bikes.

— photos by the author