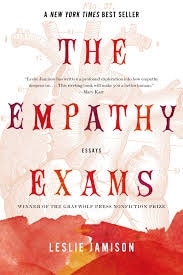 “I’m going to write for a living.”  Unfortunately, with the sorry state of the American economy, this plan seems like a quick way to end up living in a rusty station wagon on the edge of the Walmart parking lot.   I can’t say that I’ve heard of any multi-million dollar IPOs being proposed for anyone’s lucrative essay writing gig lately, particularly in the current age of the Internet blogger.  But despite the odds, there are a few brave youngsters out there who are still willing to take a chance on a life of the written word.  Barely thirty-something, writer Leslie Jamison is making a go of it and has recently garnered much acclaim for her compelling collection of essays, entitled The Empathy Exams.  Even this balding, almost fifty-something, pre-geezer can see that her work is worthy of the praise.

Presenting eleven essays that have previously appeared in periodicals as diverse as The Believer, Harper’s Magazine, the Virginia Quarterly Review and The Paris Review Daily, Jamison covers a lot of territory.  Whether she’s touring the silver mines of Bolivia or exploring the highways and backwaters of West Memphis, Arkansas, she writes with an intensity that makes for absorbing reading.  She displays a talent for getting the most out of a topic, by pursuing interesting tangents or thoroughly dissecting an idea to the bare bones.  An essay about a convention for sufferers of Morgellons disease in Austin, Texas or the insanely brutal Barkley Marathons in the mountains of eastern Tennessee is more than just a story in her hands. 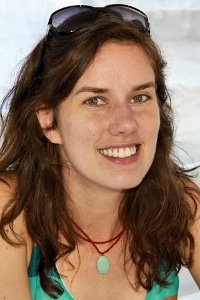 But Jamison is at her very best when she’s writing about her own experiences, particularly in a medical setting.  She tells of her stint as a practice patient for medical students and her recovery from a physical assault while walking the streets of Nicaragua with an intensely personal touch that is simultaneously poignant and fascinating.  This exploration of her own suffering culminates in the final essay – well worth the price of admission on its own – a Grand Unified Theory of Female Pain.  Drawing on numerous literary sources – from Leo Tolstoy to Stephen King – and revealing her history of anguish, heartbreak, stoicism and self-pity she delves so deeply into her own psyche that it’s uncomfortable to read at times.  The fact that she manages to create a coherent theme out of such extremely personal experiences makes the essay that much more remarkable.

Winner of the Graywolf Press Nonfiction Prize, The Empathy Exams is a wide-ranging collection of well-crafted essays that deserves the many accolades it has received.  Jamison’s thoughtful and powerful prose combined with a fearless willingness to write about her personal struggles results in numerous haunting and unsettling moments that are sure to affect any reader.  Highly recommended.

Reviews of other books from Graywolf Press: