Cozy Up to the Grill 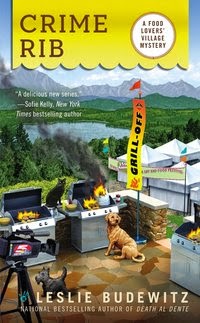 Jewel Bay, Montana, has a lot going for it.  A beautiful lake and surrounding scenery, a charming village center and a burgeoning reputation as a place for great food, featuring gourmet restaurants, locally sourced foods, and a thriving artistic community.  At the center of it all is Erin Murphy.  Her family owns the Merc, the general store in the center of town that is at the forefront of promoting Jewel Bay as a haven for foodies, greenies and anyone looking for a real, authentic Montana experience.  But this is Cozy Mystery World, so things naturally go awry.

In Crime Rib, the second installment in author Leslie Budewitz’s Food Lovers’ Village Mystery series, Jewel Bay is in preparation for its annual summer festival.  This year, one of the local restaurateurs has convinced a television show to cover the event, at the heart of which will be a steak grill-off.  The host has connections with one of the local chefs and the entire town hopes to benefit from the publicity and increase in visitors the show will bring to the yearly festivities.  Erin is still a little shaky from the events from the first book (there are virtually no spoilers in Crime Rib – feel free to go back and read the first installment, Death Al Dente) but she’s an optimist and an astute businesswoman with a good eye for great food.  But even the best steak in the world can’t make up for a murder, which is exactly what Jewel Bay has on its hands on the eve of its busiest weekend of the year.

Crime Rib is a pretty standard cozy mystery, with a core cast of colorful characters placed in a relatively unique situation and a heroine forced by circumstance or temperament to engage in amateur sleuthing when murder comes to call.  In this case, Erin Murphy is a good fit for the role of main protagonist.  She’s practical, loves food and has history in Jewel Bay (which gives her some convenient connections).  Though her family has roots there, she is a recent returnee from the big city, so she’s relearning the ins and outs of the village along with her readers (which gives her an outsider’s perspective).  I like Erin – and she gives one of the best speeches in cozy history about why she feels the need to pry into police business.  She may be nosy but her heart is in the right place, she’s smart, and when she breaks out a spreadsheet to catalogue her suspects you can’t help but love her just a little.

The peripheral cast is a little confusing – there are a lot of them.  Budewitz helpfully includes a cast of characters in the front of the book, with occupations and connections laid out for easy reference.  I’m glad she did, I was forever getting people mixed up.  It probably would have helped if I started with Death Al Dente, but even then I think the cast might be a bit on the large side.

Main supporting characters include Erin’s mother and sister, the owner of the bar next to the Merc, and a couple of handsome locals with their eyes on Erin.  Though in the second installment it’s too early to tell, that situation has the potential to be frustrating if Budewitz doesn’t have Erin choose between her potential suitors.  She doesn’t want a character on her hands wearing out her readers with constant romantic waffling.  She might also want to ease back just a touch on the orgasmic food descriptions – Erin’s constant over-enthusiastic noshing gets a little wearying after a while.

The mystery is actually decent – I would say better than average for a cozy.  I didn’t entirely figure out who did it until late in the book, which is always a good thing, and it made sense in a fictional sort of way.  As always, the characters and setting are more important, but a good mystery is a nice perk.

Overall, Crime Rib (despite the groan worthy title) is a pretty good cozy read.  I like Erin, Jewel Bay seems like a place I’d be willing to revisit (though maybe not so much in the winter – brrrrr) and there are some recipes in the back of the book if that’s your thing.  A definite recommendation for fans of the genre, especially those attracted to food related mysteries.

My thanks to Leslie Budewitz for sending me a review copy of Crime Rib.