Life and Death in Tornado Alley… 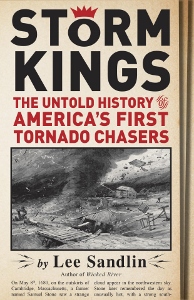 Other places may be colder, hotter, wetter or drier, but only one place can claim to be Tornado Alley.  Providing an ideal stage for the mixing of cold air from the Arctic and warm wet air from the Gulf of Mexico, the central US experiences more monster tornadoes than any place on earth.  For this reason, when Europeans first began settling the area, they didn’t really know what they were up against.  On rare occasions, remarkably big bad storms would come raging through, destroy everything in their path and abruptly vanish.  Other than blame such phenomena on the work of the Devil, useful explanations were sorely lacking.  In Storm Kings, history writer Lee Sandlin tells the story of the men who first tried to unravel the mystery of nature’s most violent storms.

Sandlin – author of the critically acclaimed Wicked River, a history of the Mississippi – explains how challenging it was to be scientific in the approach to these lethal storms.  Tornadoes occur rarely and randomly enough that scientists could never be at the right place at the right time and eye witness testimony was hard to rely on given that most observers were still in shock, having just witnessed the destruction of their family, friends and livelihood.  Painfully slowly, men of science – starting with Benjamin Franklin – began to piece together some details, creating a tentative and highly speculative explanation for these events.

Much of the book focuses on the squabbles between these so-called “storm kings” each promoting their own pet theory that they would defend with passion, despite a paucity of useful information.  Sandlin makes it clear that the weaker the evidence the more outrageous the associated scientific claims, especially during the 1800s when a fortune could be made by any talented quack.  But eventually – aided by World War II radar technology – tornado experts developed the knowledge and experience to accurately use the tornado “watch” and “warning” designations that are standard procedure today, throughout tornado territory. 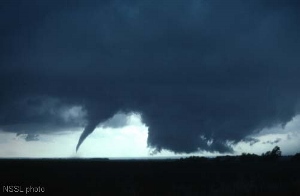 Sandlin’s detailed descriptions of some of the deadliest storms in US history make for thrilling reading and in general the author’s storytelling skills are top notch, as they were in his first book.  However, this work suffers a bit because the scientific progress in this area was so sluggish for so many years.  Between Franklin’s initial forays in storm science – involving more than just kite flying – before the American Revolution and the breakthroughs of Ted Fujita within the past 50 years, not a whole lot happened.  While there were plenty of quarrels in both the scientific and governmental domains during this time and Sandlin includes some interesting stories – nobody really got much closer to figuring out why tornadoes happen. 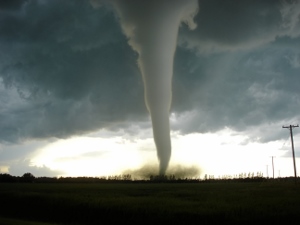 In the end, Storm Kings is an entertaining read about a terrifying topic, bringing to life plenty of old frontier history.  While I enjoyed his first book more, I’ll continue to be happy to read whatever Sandlin has planned next.  A strong recommendation for American history buffs, particularly those who reside in tornado country.  Also a good choice for any twister hunters out there, loading up the station wagon with Slim Jims and Mountain Dew, getting ready for tornado season.   Happy hunting!