Soaring (and litigating) into history… 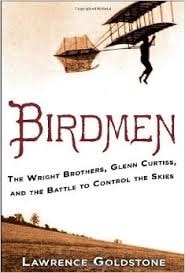 In the vast pantheon of great American heroes, there are only two men – brothers, actually – who can claim space on not just one, but two state license plates.  (Ohio and North Carolina have been fighting over the legacy of Wilbur and Orville Wright for decades and as every fifth grader knows, the former bike mechanics invented the airplane, or more accurately, they achieved the first powered, controlled and sustained heavier-than-air flight by a human being.) But there’s much more to the story than the Wright Flyer I successfully flying forty yards over the soft sands near Kitty Hawk in 1903.  Award winning author Lawrence Goldstone tells the rest of the story in Birdmen, a remarkable saga of scientific brilliance, unmitigated greed, astounding bravery, unwavering family loyalty, marketing ineptitude and the birth of the aviation industry.

Appropriately, Goldstone starts at the beginning, revealing how the Wrights got their start and accomplished their goal of flight through exhausting trial and error.  But the book is primarily about what happened after Kitty Hawk.  While the dirigible crowd still had an enthusiastic following in the late 19th century, there were many in America and Europe who had the prescience to recognize that fixed wing aircraft held enormous potential for both celebrity and fortune, providing the Wrights with a daunting number of competitors.  In fact, the field was so crowded that it took many months for the brothers’ singular historic achievement to be recognized as such.

One of the keys to the Wrights’ success was the flexibility they designed into their wings which allowed them to warp the trailing edge and thus control the flight of their aircraft.  Following their success, they patented this design, claiming that any technique that modified a wing in this or any similar manner was their invention.  With the subsequent introduction of ailerons – the hinged flaps you can see on modern jets to this day – by other innovators, an aeronautical patent battle of epic proportions ensued.  By vigorously claiming patent rights, the Wrights attempted to gain control of the entire burgeoning new industry, both in America and Europe. 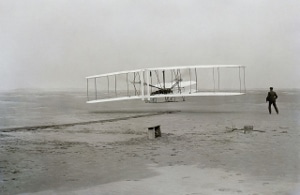 The Wrights’ primary opponent in this clash was New York inventor Glenn Curtiss, who they accused of stealing their ideas.  Unfortunately, the vitriol with which the brothers fought these many court battles would significantly impact their mental and physical health as well as the future of the aviation industry, particularly in America.  The fact that Curtiss designed safer and more reliable planes made the Wrights even more determined to take him down and the author’s in depth look at this darker side of Wilbur Wright is both fascinating and tragic to read.

Wisely, Goldstone chooses to leave the courtroom often enough to keep things lively, spending much of the book describing the many popular air shows that traveled the country until the onset of World War I.  His deftly told stories of the many instant celebrities who risked their lives in rickety airborne deathtraps for a chance at momentary fame make for some fun and gut-wrenching reading. 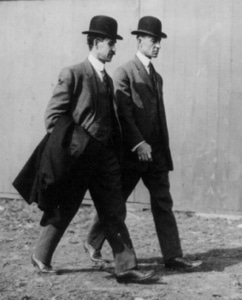 My only gripe with the book is that I didn’t learn as much about the science as I had hoped.  Given that the full extent of my aeronautical knowledge is limited to the flight attendant’s speech prior to takeoff, the author’s momentary mention of concepts like yaw, pitch and roll left me rather clueless.  This reader was left begging for some diagrams and an appendix to provide a brief overview of the science of flight, which would have allowed me to follow the legal wrangling with greater understanding.

More a history of patent wars than a history of aviation science, Birdmen is a notable look at the astonishing decade in which the airplane took the world by storm.  It also presents a compelling and complex biography of the greatest brother inventors in American history.   I can recommend it highly to anyone who enjoys energetic history writing, but it’s best read while firmly attached to terra firma.  Four out of five stars.