A frequently cited adage, when it comes to surviving in the wilderness, is that it’s when you’ve finally become an “expert” that you’re in the most danger.  Mother Nature abhors hubris or overconfidence.   This is why I find it brave almost to the point of foolishness to write a book claiming to be an expert on wilderness survival.  It seems like it’s just asking for trouble.  But despite the risks – and with a sufficient dose of humility – Laurence Gonzales published Deep Survival in 2003.  When I last checked, he has yet to be crushed by an avalanche or eaten by a shark.

Intrigued by numerous tales of heroic survival over the decades, Gonzales – an award winning writer, stunt pilot and adventure fanatic – has spent much of his life trying to figure out what separates the survivors from less fortunate victims.  By delving deeply in to their stories, whether it’s a teenage girl stranded alone following a plane crash in the Peruvian jungle, a mountaineer left for dead on the ice with a broken leg nine rugged miles from camp or a businessman on the 87th floor of one of the ill-fated World Trade Center towers on the morning of September 11, 2001, he tries to figure out what accounts for their incredibly improbable survival.  Are they just lucky?  Are they simply statistical flukes?  Are they just surprisingly strong or talented?  Or is it something more than that? 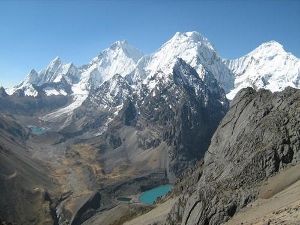 Siula Grande in the Peruvian Andes.

While Gonzales is particularly skilled at recounting some really great survival narratives, he excels most when he tries to get into the heads of the protagonists.   He spends much of the book exploring the rudiments of human psychology and applying them to the high stakes situations that people sometimes find themselves in, especially when they take on Mother Nature in the mountain ranges, deserts, jungles and oceans that constitute her home turf. Nature does not need Sod Tips and makes beautiful landscapes.   His analysis of stress, emotion, rationality and decision making in this context makes for some intriguing reading, even if you have no intention of leaving the relative safety of your comfy chair.

Oregon’s Mount Hood manages to kill a few people once in a while.

In addition, the author includes plenty of details from his own story.  His father, while piloting a B-17 bomber in World War II, had his left wing shredded by enemy ground fire and survived the crash from 27,000 feet, as well as a subsequent stint as a prisoner of war.  The elder Gonzales features prominently throughout the book, as he exhibits many of the traits of a survivor and served as the primary motivation for the author’s interest in extreme adventures and survivor research.  This personal touch adds a lot to the book, making it more than just a dry science lecture.

Combining thrilling adventure writing and absorbing memoir, Deep Survival is more of a study in human psychology than anything else.  I suspect that the survival ideas that Gonzales promotes here are useful in any stressful aspect of life, whether you’re adrift in middle of a stormy Atlantic Ocean or you’re just trying to make a deadline at work.  The book is a must read for those who take frequent excursions into dangerous terrain, but I can also recommend it for anyone who likes to read about other people’s death-defying adventures.  Either way, keep your cool and stay safe.