He’s one of the most honored individuals in the pantheon of American heroes, yet many of the details of his storied career are lost in the shadows of time.  Moreover, despite his high standing, there’s still plenty of vigorous debate as to whether he’s truly worthy of all the accolades.  In Columbus: The Four Voyages, acclaimed biographer Laurence Bergreen tells the incredible story of one of the greatest explorers of all time, trying to determine whether the man 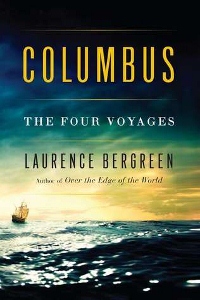 was more hero or villain.

The author doesn’t waste much time in introduction, quickly setting sail with the Admiral of the Ocean Sea on his first voyage.  Inspired by Marco Polo, Columbus was certain that if he sailed due west he’d shortly be shaking hands with the Great Khan of China.  Despite three additional trips spanning twelve years of continuous exploration and plenty of evidence to the contrary, he never gave up on that delusional dream, always thinking that he’d find the glorious wealth of Asia just over the horizon.

Supplementing 400 pages of text with quality maps and numerous images, Bergreen explores each of the four voyages, detailing Columbus’s “discovery” of the Bahamas, many of the Caribbean islands, South American and Central America.  The author is at his best when he delves into the mind of the ambitious Admiral, demonstrating that while he may have been one of the most fearless and talented ocean navigators in history – eschewing most of the technical aids available at the time – he pretty much failed at everything else: international diplomacy, tropical island governance, gold mining, missionary work, financial planning, mutiny prevention and monarchical politics.  The only way to accurately dramatize his life story would be to play it as a violent, dark comedy of errors.   Bergreen acknowledges this irony with frequent humorous asides, pointing out that the most acclaimed explorer in history spent most of his career about 11,000 miles from where he thought he was.

Bergreen excels at compiling copious resources, often of dubious accuracy, into an enjoyable, informative and readable whole.  I enjoyed his Magellan biography more, but I think that’s primarily because Magellan is simply a more likable protagonist than Columbus.  While the latter’s story is entirely fascinating, I have to admit that I tired of his unending series of blunders after a while.  There’s only so much sympathy one can have for a self-pitying, delusional, avaricious tyrant with some sort of personality disorder.  It’s not like he was the first person to ever encounter native peoples from an exotic land.  When all you have in your play book is a single strategy – smile, take some hostages, demand “Where’s the gold!” – you’re not going to succeed.  To be honest, the author is a bit more forgiving of Columbus’s faults than I am, attributing the man’s tainted legacy more to incompetence than malevolence, although the distinction can often be difficult to appreciate.

Before I read this book I knew that the discovery of the New World was one of the triggers of the Renaissance in Europe, but I had no idea how little 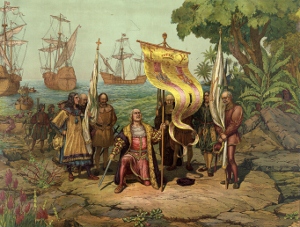 Our hero lands somewhere in the Bahamas in 1492.

Columbus actually had to do with that transformation.  Bergreen makes it clear that while the explorer changed the world, the man himself was hopelessly mired in the Middle Ages, which may partly explain why remarkably few of the names he gave to his hundreds of discoveries actually stuck.  The world was moving on before he’d even made it back to Europe.

In the end, it’s Bergreen’s willingness to delve deeply into the psyche of this fascinating explorer that makes Columbus: The Four Voyages a success.   Even though what he finds isn’t always pretty, he maintains a dispassionate view and creates some very intriguing reading.   The book provides  a new perspective on this complicated individual and explains why his story still generates such disparate and fervent opinions to this day.