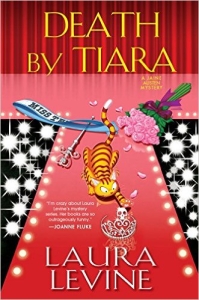 Jaine Austen, the love-lorn female detective of the elastic waist jeans and vintage Coco Puffs t-shirt is back in action again, accepting an unlikely gig for the almighty dollar, which just might keep her cranky kitty Prozac in fish guts for a little longer. Entering into the teen queen beauty scene with Mommy Dearest, aka Heather Van Sant, and her ambivalent bookworm daughter, Taylor, Jaine is preparing to echo her success with the Toilet Masters Christmas jingle by penning Taylor a lovely song to croon. She’s mainly looking forward to some swank hotel time and good eats (with Prozac smuggled in, of course). When the pageant director, a fickle creature, is targeted by a seemingly angry contestant, a case of false identity leaves an innocent girl dead and a killer on the loose. Worst of all, Jaine’s cash cow client is the prime suspect and if she wants her pay, she’ll clear the feckless Heather. Meanwhile, there’s a killer on the loose who prefers that the hideous truth stay buried.

Meanwhile, unlucky in love Jaine actually has a pretty hunky boyfriend. If only his posh family didn’t loath her – and she didn’t keep accidentally destroying their house or sending them to the hospital. Is being in a relationship really worth all the pain and opportunities for embarrassment?

Another rollicking tale, Death by Tiara amplifies the comedy of the Jaine Austen series, providing readers with some enjoyable Jaine time as we focus on her ill-fated relationship. The murder, an event which doesn’t occur until the halfway point of the novel, and the sleuthing is overshadowed with hilarious incidents and accidents all the way from Jaine’s attempt to keep claw-happy kitty from her latest CD cabinet to a romantic ride on the beach ruined by Jaine’s stampeding horse. The aura of teen despair and drama, heightened by brooding pageant moms is somewhat stagnant in comparison, even a little, this devoted fan is embarrassed to say, forced. While the accidental Cat-Be-Gone hairspray and the various interludes of the in-laws from hell keep readers in delighted stiches, the main shebang of the show, ala the beauty contest, feels lackluster. I guess it’s just hard to complete with Jaine’s literal home wrecking tendencies.

The mystery takes an even further backseat. The sleuthing is spotty and readers lose focus on the suspects in between the long gaps of amusing side stories. Now, it’s a cozy mystery comedy, so the character driven focus is not only expected, but required. Still, a little more mystery and some near-misses/nosing about potential suspects would certainly be an enjoyable addition. Jaine truly shines when tracking down murder most foul and we miss her internal monologue and suppositions.

The emails from Tampa Vistas, her parent’s retirement home, are concerned with Daddy and his new love, a gaudy golf cart with musical horn. Proving a continual terror to his fellow residences and wife, the emails interspersed between chapters are side-splitting and providing all the absurd slapstick a comedy loving cozy-mystery addict could want.

While Death by Tiara isn’t my favorite Jaine Austen adventure in the series (I mean, I just want more from it – it’s holding out on us), the story is still lighthearted and amusing. Readers are glad to reconnect with a favorite sleuth and see the changes in her normal love-life quandaries. I look forward to the next edition in the Jaine series!