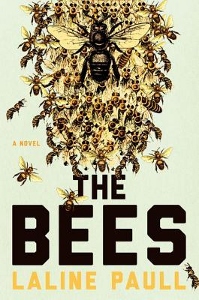 Flora 717 is the lowest of the low.  A humble sanitation worker in a struggling honey bee hive in the last remnant of dwindling countryside on the edge of the suburbs, she’s one of tens of thousands of sisters all working to support The Queen and her entourage, as well as dozens of lazy, arrogant drones.  But Flora is not as simple as she appears.  Calling on her hidden potential and bravely asserting herself despite remarkable adversity, she may well hold the secret to the hive’s survival.  Teeming with literary flourishes aplenty, Flora’s heroic adventures are chronicled in The Bees, by British novelist Laline Paull.  As an avid beekeeper, my anticipation was high.  Unfortunately, the story didn’t give me the dramatic buzz I was looking for.

Starting with Flora’s emergence as an adult worker, the author take us on a wide ranging tour of hive life.  Following her initial duties as a cleaner, Flora goes on to work in the nursery, feeding larval bees the royal jelly and bee bread they need to grow into healthy adults.  She then proceeds to defend the hive against intruders, ward off unwanted advances from the local drones and even spend special time with The Queen.  But it’s not until she takes on the role of forager that her true calling emerges.  Blessed with remarkable tenacity, she makes a name for herself, bringing home copious amounts of nectar and pollen, whatever the weather. 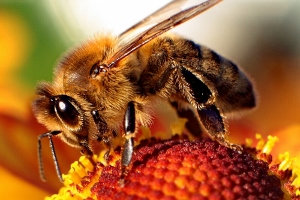 Paull writes with a vibrant, almost sensual, touch as she explores the strange world of the honey bee, vividly describing how heavily reliant the bees are on scent and vibration, senses so rarely useful for humans.  I also enjoyed reading of Flora’s treacherous adventures outside the hive, foraging and interacting with other creatures – referred to collectively as “The Myriad” – like spiders, crows and evil wasps.  Regrettably, the author’s many intricate and delicate literary flourishes aren’t enough to save the book.

Much like quality historical fiction, biological – or entomological – fiction needs to have a firm basis in reality.  A novel that purports that Abraham Lincoln was a big NASCAR fan or that Anne Boleyn lived to a ripe old age after giving birth to three strapping sons is likely to lose most of its dramatic power.  In a similar way, Paull has stretched the reality of honey bee biology and society beyond acceptable limits.  While her regrettable use of poetic license may serve her storyline, I found it to be a disappointing frustration.  Honey bees are plenty fascinating in the real world and Paull’s ill-advised “adjustments” to their society make it almost unrecognizable.  Her cavalier disregard for the facts is astonishing given that she clearly cares about honey bees and the many challenges they face.

Meant to be a heroic – and ecologically friendly – chronicle of a spunky protagonist standing resiliently against societal pressure, The Bees fails for this beekeeper.  Paull’s decision to base crucial parts of the storyline on multiple hardcore biological implausibilities – even impossibilities – is an insurmountable obstacle for me, making me unable to recommend it.  In the end, I suspect that readers without personal exposure to the world of the honey bee are likely to come away with more misinformation than knowledge.  Honey is sweet.  This book, not so much.

Other Readers Lane reviews of books about invertebrates:

Mind Your Own Beeswax

Bee photo by Maciej A. Czyzewski