I was expecting a raunchy redneck.  When I heard about some kid gaining massive numbers of Twitter followers by posting quotes from his dad I figured they were just the foul-mouthed ramblings of some ignorant old man being made a fool by his slacker son.  That the quotes were being turned into a book and, inexplicably to my mind, a TV series was just further proof of the decline of civilization.  Then I read Sh*t My Dad Says and everything changed. 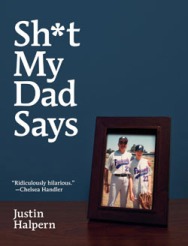 Sh*t My Dad Says did indeed start as a Twitter account.   But the author wasn’t some lame kid with a bone to pick with his father.  Justin Halpern was at the time in his late 20s and had just moved home with his parents after a string of unfortunate circumstances.  He was gainfully employed but needed housing on short notice and his parents were there for him.  The Twitter account was the idea of friends who had been enjoying the quips Halpern had been casually passing along since returning home.   The phenomenon that followed is both a testament to Halpern’s skill as a writer and memoirist and his father’s blunt, hilarious sincerity.

The book isn’t simply a compilation of quotes from Twitter.  It’s a combination of quotes on every sort of topic and anecdotes from Halpern’s life.  It is also absolutely hysterical.  Sam Halpern (The Dad) is an educated man who spent his career doing cancer research.  He was raised poor and spent enough time in the military to acquire a fabulous combination of brash vulgarity, street tough wisdom and learned opinion.  He also loves his son and the feeling is mutual.  Sh*t My Dad Says is not an angry swipe at the elder Halpern, it’s a truly loving and sometimes moving tribute to a man who made life interesting on a daily basis.  It’s also funny enough to occasionally make wetting oneself a real risk.

The book is beautifully put together, combining longer anecdotes with short sections of quotes in just the right ratio so the reader doesn’t tire of either.  The anecdotes give you a sense of the history of the Halpern family and its quirky dynamics while the quotes are just downright hilarious.  This, one of my favorites, should give you a good idea of the flavor of Sam Halpern (after discovering he had eaten dog treats by accident):

“Snausages?  I’ve been eating dog treats?  Why would you put them on the counter where the rest of the food is?  Fuck it, they’re delicious.  I will not be shamed by this.”

Honest to God, I love this guy.  Sh*t My Dad Says is so much more – and so much better – than I expected.  This is a family that loves and respects each other – Halpern isn’t really making fun of his dad, he’s in awe of the man and his willingness to simply put everything out there, for better or worse.  He’s also a skilled writer who turns his past into poignant and funny vignettes.  For his part, Sam Halpern is perfectly at ease being the topic of books, Twitter or whatever else might come from his son’s efforts.  He’s proud of his boy.  In his own words:

“What do I give a fuck?  I don’t care what people think of me.  Publish whatever you want.  I just got two rules: I’m not talking to anyone and whatever money you get, you keep.”

If you don’t like bad language, do not read this book.   Everyone else, read, laugh and enjoy.  Highly recommended for teenagers and up.