It’s Tough to be a Quirky Female Protagonist 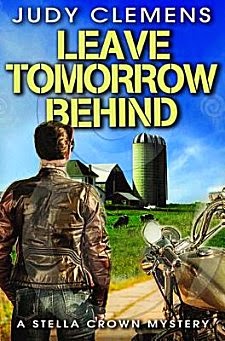 “A quirky, tough female protagonist with a soft center”, reads the quote from The Boston Globe on the front cover of Leave Tomorrow Behind.  I can’t begin to describe my trepidation upon spying those damning words.  Such a description brings up images of heroines who are mean or stupid and melt when the right man comes along to save them from their own nasty selves.  I didn’t just fall off the turnip truck – I’ve seen enough supposedly “tough” female cozy mystery characters that turned out to really only have low self-esteem to be extremely wary.  Fortunately, I needn’t have worried, for once in a great while someone actually manages to write a tough female character that actually is, well, tough.   Everyone, meet Stella Crown.

Stella Crown is a dairy farmer.  She also likes motorcycles, has no interest in traditional girly pastimes and has an extremely handsome fiancé and an equally annoying future sister-in-law.  In Leave Tomorrow Behind, Stella is headed to the county fair with her young friend Zach.  He has raised a calf that he will be showing and Stella is his proud sponsor.  Along for the ride is handsome Nick, who battles a chronic illness, and irritating Miranda, who seems to only want to battle Stella about her wedding plans (plans that Stella has no interest in making).  When Stella stumbles on a murder victim on the first night of the fair, she gets to add one more thing to her already annoyingly full plate.  She is not happy.

I like Stella.  In some ways she’s a stereotypical “tough woman” – she has short hair, rides a motorcycle, has tattoos and loves her job that involves hard physical labor.  But she’s so much better.  She has almost no patience, few if any social graces and habitually does exactly as she pleases (and suffers the consequences).  She loves Nick, but does not dote on him.  She loves her friends but does not ooze affection.  She’s just a very, very straight forward, easily irritated person who puts up with most other people only because she has no choice.  Her loyalties are hard won and she would not be caught dead slobbering all over those she cares about.  She figures they know how she feels and that her practical actions on their behalves speak for her.  She’s both frustratingly stubborn and sort of awesome.

Her peripheral cast of characters is solid, including the supportive Nick and various others who work on the farm or are part of the fair.  Miranda is the lone “quirky relative” to show up here and she annoyed me, so I’m glad there weren’t more.  The mystery isn’t particularly strong, but it isn’t too bad for a cozy.  There are lots of potential suspects, so the final revelation isn’t grossly obvious.  The book is well written, with solid characterization and plot development.  It’s also not filled with typos and grammatical errors, something I’ve come to appreciate as no longer being the norm.

Leave Tomorrow Behind is not the first Stella Crown mystery – there are actually 5 others preceding it, the first published all the way back in 2004.  One would expect to be hopelessly lost so far into a series, but that is not the case.  There are definitely places here and there where I wanted to know more about Stella and her back story but I still enjoyed this outing very much and feel like the other books were not spoiled by having read this one first.  I’m definitely interested in going back and reading some of the other installments in the series.  Leave Tomorrow Behind was published in 2013 after a five year hiatus during which author Judy Clemens focused on a different series.  I hope she comes back with more Stella Crown books in the future.  4 stars out of 5 and a solid recommendation for cozy mystery fans.