Sell or Be Sold

I can’t quite imagine how much pressure it is to support your family as a salesman.  Quotas and commissions and competition – it all sounds like a recipe for a bleeding ulcer.  But some people thrive on it all – or are simply born to sell. 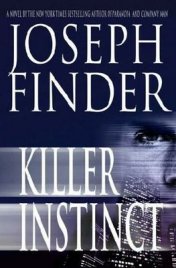 Jason Steadman doesn’t really fit the salesman suit, but he’s good at his job.  Sometimes good isn’t good enough, though, something Jason finds out in great detail in Killer instinct.

Jason is a good guy.  Affable, well liked and laid back, his clients love him.  He isn’t a hard hitting salesman, but he gets the job done and is a generally relaxed and happy man.  He loves his wife, likes his job well enough and would be perfectly happy to remain a mid-level salesman at Entronics forever.  His wife and his bosses don’t see things quite the same way.  She would like him to have more ambition (and make more money); they would like him to be more aggressive (and make more sales).

When Jason happens, by pure chance, to meet ex-military tow truck driver Kurt Semko, he gets the dubious chance to be what everyone else wants him to be.  The two get talking about their mutual love of baseball and become something like friends.  Soon Semko is part of Jason’s life.  Soon after he is too much a part of Jason’s life.  Jason should really do better background checking on both his friends and potential coworkers…

Author Joseph Finder spins a good tale in Killer Instinct.  Jason is a likable protagonist.  Even when his decisions are questionable, they’re motivated by the desire to please – he’s rarely selfish or greedy.  Setting this nice guy into the world of cut-throat high level electronic sales and applying a little pressure to go above and beyond his natural ambition is a perfect way to introduce an element of risk Jason wouldn’t otherwise consider.  Semko is the embodiment of that risk, with his military brusqueness and take no prisoners approach to business and life.  As the two try to dance around their conflicting basic natures we’re set up for a tight, well developed thriller voiced in the first person by the amiable Jason.  As his tension rises, so does ours.  Even if corporate intrigue isn’t your thing, you’ll be drawn in by his genial nature and the essential dueling personalities at play.

My one complaint is that I don’t particularly care for Jason’s wife Kate.  She isn’t evil, but she’s a little spoiled, a little greedy and a little pushy.  She does provide the impetus for Jason to try to “get ahead”, leading to much of the action of the story, but it’s hard to sympathize with her as a character.

Aside from that relatively minor issue, Killer Instinct is a well written, well conceived and nicely characterized thriller with a natural story progression with just enough twists to keep you turning the pages.  It’s a fast read, even at 400 pages, and perfect for any thriller fan looking for a quick fix.  4 stars out of 5.