End of War, The 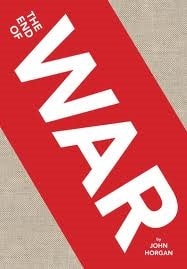 Are most of your friends, neighbors and co-workers in favor of war?   Do they seem like the kind of people that opt to kill others in order to settle a conflict or dispute?  If you answer no to questions like these, if most people are honestly opposed to violence, why have wars occurred so frequently throughout human history?  You may think you know why, but science journalist John Horgan has found that most of what people think about the cause of war is wrong.  He reveals his findings in The End of War, explaining why war is not as inevitable as you might think.

After years of collecting data from his students, his neighbors – maybe even strangers at the grocery store – Horgan has a keen understanding of the most commonly invoked explanations for war.  He starts out the book by dissecting these ideas and systematically debunking each of them, exploring much of what is known about the psychology and sociology or war.  Having dispatched numerous myths about the origins of war, he goes on to present his own argument, supporting his case with solid logic and plenty of scientific evidence.  Rather than spoil his surprise here, I encourage you take a few hours to read his concisely fashioned thesis.

It’s obvious that until we actually understand why wars happen we won’t have much success in preventing them.  The beautiful thing about Horgan’s thesis is that the primary cause of war is remarkably simple, making the prospects for peace in our time considerably more likely.  Some would even argue that worldwide peace is actually inevitable.

A well-written, thoughtful and passionate exploration of the origins of war and peace, The End of War displays a host of convincing arguments and delivers a remarkable amount of optimism given the dark subject matter.  Since the vast majority of people all over the world quite clearly oppose war, I think there’s reason to share in Horgan’s positivity.  Strongly recommended for anyone interested in waging peace.

Other reviews of peace books:

Other reviews of books published by McSweeney’s: