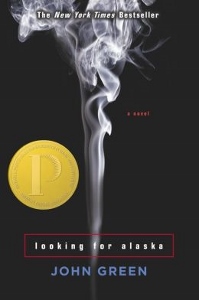 What should teenagers read?  My answer is anything that captures their easily diverted attention, an answer that really applies to anyone.  But a response more to the point might be anything that addresses the real issues that teens face in their increasingly complicated lives.  Now, I don’t read a lot of teen literature, but even a brief glance at the bestseller lists confirms that much of the genre fills an entirely admirable role as escapist fantasy.  But there are other books out there that face the real world head on, warts and all.  Looking for Alaska, by John Green, is that kind of book, managing to tell a captivating story sans vampires, wizards or zombies.

Miles Halter is a skinny high school junior – with a penchant for biographies and the dying words of their subjects – who tires of his boring, smothering, air-conditioned life in central Florida.  He’s a bit of a loner who decides that he needs to seek out some adventure, choosing to transfer to Culver Creek, a boarding school outside of Birmingham, Alabama.  He gains some confidence in his decision to leave after only two “friends” show up for the going away party held by his devoted and distraught mother.

Excited to start his new life with a clean slate, he arrives at the school and quickly makes friends with his roommate Chip Martin (aka “the Colonel”) and his friend Alaska Young, a smart, sexy, quirky young woman who just happens to have a steady boyfriend in a neighboring town.  Throw a strict dean of students – Mr. Starnes – into the mix and mischief ensues.   It sounds like the set up for a thousand other young adult novels and made-for-TV movies and predictably, Miles – newly christened “Pudge” – proceeds to lust after the beautiful Alaska as young, dorky men have been known to do.  There’s also plenty of drinking, smoking and shenanigans, even some hazing and the traditional yearly school prank.

Books about life in high school aren’t inherently riveting for me, as I’ve already been to high school, but in Miles, the author has created a truly interesting character.  Miles tells his story with a unique and realistic voice and I found his moments of angst and internal conflicts to be both believable and of substance.  Like many teens, the mature and immature parts of his brain are still battling for supremacy with much vigor and it’s fascinating to watch.  The supporting characters of the Colonel and Alaska are also well written and the skillfully balanced alliance of the three characters makes for fun and often emotional reading.

Of course, when any book for a teen audience includes references to alcohol, sex or anti-authoritarian behavior there must be calls for its removal from libraries and classrooms.    This book is guilty of all of the above – how could any realistic portrayal of high school not include them? – and it was one of the most challenged books of 2012.  Undoubtedly, the characters in this book don’t always make wise choices, but it’s clear that success in school is a high priority for them and Miles in particular enjoys school and is just the kind of thoughtful, independent student we need in high school classrooms.

Moreover, rather than ignore alcohol and sex, Green presents them with some thought and nuance.  Mistakes have clear and sometimes tragic consequences and the characters learn that the hard way on numerous occasions.   While the behavior in the book will make any parents of teen aged offspring cringe at times, in my opinion the author handles these real-world issues responsibly while at the same time writing a gripping story.

In the end, Looking for Alaska excels based on the complicated characters, realistic dialogue and a skillful balance of humor, pathos and intrigue.    A powerful first novel by John Green that I can strongly recommend for mature teens and adults who aren’t afraid to take on real world issues.   Five enthusiastic stars.