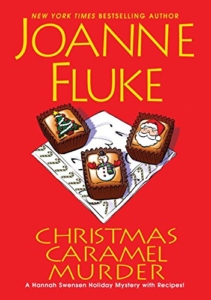 Hannah and the Ghost of Christmas Past

As the days grow shorter, the Christmas trees go up, and glitter mysteriously embeds itself around the house, winking cheerfully from the carpet, the cozy is cranked and readers are ready for a little light mystery and some mouth-watering recipes. The 20th entry into the Hannah Swenson cozy mystery series, now apparently a Hallmark television event, Christmas Caramel Murder rekindled my waning interest in the series while also getting me ready for eggnog, cookies, and a roasting fire.

Indeed, it’s back to the good-old-days with a flavor much akin to the first couple of stories which started it all such as Chocolate Chip Cookie Murder, Strawberry Shortcake Murder, Blue Berry Muffin Murder, etc. Fluke herself seems to be having some nostalgia and this novella (yes, novella) goes back in time to before Hannah’s disappointing marriage to Ross to the previous Christmas season. The Mike and Norman triangle is still (annoyingly) going on, but even here there is a strange hint of bittersweet sadness that evokes “the good old days” for readers, who still thought that Norman, obviously perfect for Hannah, was in the running for her hand.

Even more prominently, the billowing aroma of fresh baking and percolating coffee in warm rooms with yellow lights juxtaposes the sharp frost tinged air of a winter night and everything is gloriously atmosphere, atmosphere, atmosphere. The Cookie Jar is more than just a sideline, we’re actually back in the cozy old building, snooping through the displays and yearning for some Christmas fare.

The murder itself presents an interesting dilemma. The usually calm Lisa suspects that her formerly faithful husband, cast in the role of Mr. Claus for the town play, has a wondering eye for his old love, Phyllis Bates, who gets to star in the lead role of a svelte, sexy Mrs. Claus. Herb’s long hours, disappearances, and hedging about his location are further worrying Lisa that her short and happy marriage is coming to an end. Privy to the inside worry, Hannah is forced to suspect her own friend and colleague when Phyllis is conveniently removed, found dead in a cold ditch, right next to Lisa’s famous Christmas caramels.  Following gut over situation, Hannah is determined to both clear her friend and discover the true killer in this holiday homicide.

Upping the stakes while cranking the cozy was a good move. It restored my personal involvement in the series by adding on some plausible heartbreak (potential problems with the Beesemen’s otherwise idyllic marriage) and giving readers a reason to care, beyond just following a story, about the outcome of the mystery. The atmosphere of frozen snow and comfy restaurants also adds a homey aura of comfort giving readers both some food for thought and a little of that old time, Hannah Swenson down-home warm and fuzzy feeling.

Hannah does actually investigate in Christmas Caramel Murder and while it’s investigation in cozy style (i.e. don’t expect serious sleuth mode), the shortness of the piece gives everything a nice pace and some welcomed tension. Hannah’s final revelation, and the subsequent confrontation, put our heroine in some genuine distress and even leave readers with a few tears. Add in a strange supernatural element, with Charles Dickens’s ghost of Christmas Past being invoked, and you have a recipe for something quite quirky and quaint with just the right spice to keep us riveted while there’s more than enough sugar to keep the reader content. My hopes are a little rejuvenated with this blast-from-the-past offering from Fluke and I must admit, I can’t help but get a little excited now for future installations in the series. Recommended.