Star City, We Have a Problem… 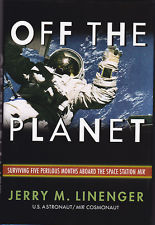 It may be the most dangerous of occupations, claiming the lives of close to 5% of all participants.  The combined risk of a launch aboard the most powerful engines ever built and the inherent hazards of the void of space explain why being an astronaut – or cosmonaut or taikonaut – is so perilous.  Despite the danger, competition for flights into space has always been fierce, with the coveted spots being awarded to only the very best and brightest.  Jerry Linenger certainly fits the mold and following an initial career as a US Navy flight surgeon – acquiring a subsequent PhD and two master’s degrees in his spare time – he began training as an astronaut, culminating in a 1997 flight aboard the Space Shuttle Atlantis and a subsequent 132 days aboard the Russian Space Station Mir.  Facing a seemingly endless stream of mishaps, the adventure called on all of the physical, mental and emotional resources he could muster.  He was lucky enough to survive and tell his story in Off the Planet, an often harsh critique of space flight at the dawn of the 21st century.

Following some brief introductory chapters, Linenger starts his story in Star City, outside of Moscow.  One of only a few Americans selected to participate in work on the Mir station, he spends several months learning the details of the aging satellite.  Hailed as an opportunity for collaboration between two former enemies – the US had no space station in orbit and Russia had no funds – Linenger’s description of the experience is not flattering.  He perseveres however and goes on to describe his trip aboard Atlantis and rendezvous with Mir. 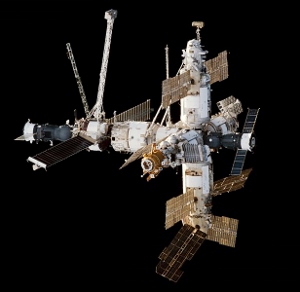 Most of the book is devoted to the author’s five months aboard the Russian station, where he accompanied two Russian cosmonauts.  Initially launched in 1986 and destined to be decommissioned in 2000, Mir had seen better days.   Much of Linenger’s description sounds like a Hoarders episode – sans cats – as the accumulation of garbage and defunct equipment over the years had exceeded the capacity for docking spacecraft to bring waste material back to earth.   In addition, coolant was continuously leaking from the aging pipes, creating a noxious and potentially unhealthy atmosphere inside the station.  This toxic background was punctuated by frequent conflicts with a less than considerate Russian ground control team, the occasional fire and other near disaster.  The dogged Linenger always seemed to have his hands full.

Fortunately, the author also finds much that he enjoyed about his adventure, from the thrill of the challenge and camaraderie with his station mates to the spectacular scenery and photographic opportunities.  He takes full advantage of his naturally optimistic personality to make the most of a potentially disastrous journey. 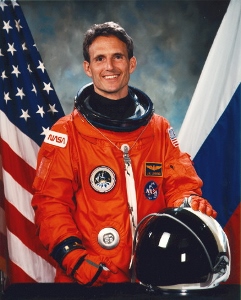 The acclaimed astronaut, doctor, author and People magazine listee prior to liftoff.

Which brings me to my only real complaint about the book.   Maybe it’s just the natural envy of a mere mortal like me, but Linenger’s life is just a little (or a lot) too perfect.   No matter what the obstacle, he doesn’t look back or express anything approaching true angst.  His perfectly lovely wife and their wonderfully remarkable toddler son and the fact that he somehow fathered two children during this adventure without a hitch only added to the low level annoyance I experienced while reading.  A little self-deprecating humor or a true exploration of the emotional toll this may have wreaked on his family would have gone a long way to make the book more realistic and entertaining.

In the end, Off the Planet succeeds as a story of pure and captivating adventure, with no critical punches pulled.  However, in more skilled literary hands it could have been much better.  But given what I’ve learned about how Linenger faces a challenge, it’s not surprising that he chose to do it himself.  Three stars for the writing plus a bonus star for the quantity and quality of the life threatening exploits.