No Use in Staying on this Holocaust Ride 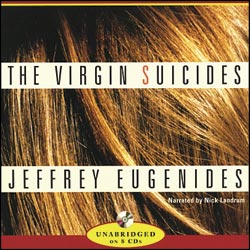 “Virgin suicide
What was that she cried?
No use in stayin’
On this holocaust ride
She gave me her cherry
She’s my virgin suicide.”

A story of haunting love and obsession, The Virgin Suicides covers a year in the life of the suicidal Lisbon girls, each of whom chooses to end her seemingly bright and beginning life with no reason, but much planning and collusion. The story, part urban legend, part intuition, part imagination, and part fact, depicts puzzle pieces sliding into place for the neighborhood boys who later grew into men, middle age yet still troubled by that first passion and questioning why someone so young would do an act so final and so often gruesome. Mr. Lisbon, spineless, simpering, docile, and his wife Mrs. Lisbon, rigorous, religiously fanatical, and scared attempt to cage their blooming daughters, making the neighborhood boys even more fascinated and desirous to rescue the sirens that still call them even after death, even after the passage of so many wilted, disappointing years. The story, although told anecdotally, through snippets stolen or questions answered over the years (the exhibits that the men still keep, shrine like), fit the morbidity and beauty of the story, coalescing into a tale about the unknowable lives of others and the lonely natures of the outcast, the shunned, and the shut in, lending a Gothic tale a hopeless aura that enraptures and embitters the avid reader.

The story is ingenious in that through the beginning, we already know the end – that all five of the Lisbon girls will die by their own choice and that there is no rescue for them. We read onward partly to fill in the gaps, to understand why, and also because of the atmospheric voice, the one that is so intimate and confined, yet belongs to a collective, very much like the universal narrator in A Rose for Emily. This way brings us into the fray, and we become one of the observers, obsessing over what happened and why – how the girls could send out college forms just to slip their long, narrow necks into nooses or gas ovens, the crunching of bones and bluing of flesh the last legacy they leave, unfulfilled, not understood, and never rescued – if they even wanted rescuing. The story ends and most of the questions aren’t answered. Are the parents to blame – truly? It looks that way, yet were there things about these mysterious, aloof girls that the collective we didn’t know, events that took place behind those slowly moldering walls drenched with the grief of loss and plans of death.

Emerging sexuality, the boys fascination over these beautiful girls who really aren’t all that beautiful, other than Lux, their lustful bathroom dreams and their fear – the terror of what they see happening as the girls fade away, as the house shuts down, as the parents lock and bar away the children they cannot protect from death, lends the story a strange sensual aura. Is it lust denied? Is it frustration? Is it rebellion? Is it a search for something else? The boys project their assumptions, their desires, their fears, onto the girls who remain out of their reach, a living tangible mystery. We cannot help but be fascinated and fearful along with our narrator – moving from curiosity to a demand for knowledge – an answer in a world where ultimately, you don’t know the people in your life, the clues hidden behind strange doors, the neighbors who live their entire lives just feet away from you.

Normally, stories with no answers are unfulfilling, at least to me, but the open ended nature of the Virgin Suicides instead makes the story continue to last, the descriptive, sensually full voice of the mourning narrators still resonating, making us intuit our own answers and accept the reality of fully growing up: there isn’t always a why. There isn’t a known quantity to gage the world by and to gage people by. Some people just don’t fit, and what if you are, or know, or love one of those people. What is there then, in the afterwards of their void?

The  narrative itself is simply enjoyable, in a macabre way, for the unique descriptiveness, the way that Jeffrey Eugenides evokes the look and feel of a world hazed with memories, the physicality of the known, and the unquantifiable longing of the unknown and the wanted. He captures the imagery of this town, these people and this place, until we can see and smell the moldering Lisbon house, see the paramedics who keep coming, their stride too slow, the final deaths. The audiobook, read by Nick Landrum, brings these words alive and creates worlds that although grim are also oddly comforting, in that we keep wanting to return, wanting to re-analyze, to examine the possibilities and how death takes the young, how hopelessness is created, how mental instability, unrequited desire, stunted youth, the shape of the country, and the perception of a neighborhood can build such an insular monster from which there is no escape.

The Virgin Suicides ends, leaving readers with more questions than answers, but those questions live on as do the Lisbon girls and their carefully chosen deaths. Dark, brooding, broken, and hopeless, Eugenides creates a world we cannot soon escape from and shows the transition from child to adult, the realization of all that goes unanswered, all that is worth living for, and all that is better off missed. Highly recommended.