World Until Yesterday, The 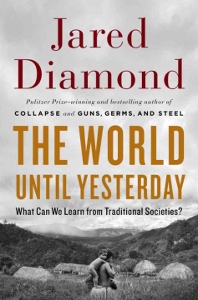 What are the best things about living in a modern civilization?  It’s not hard to come up with compelling list of benefits when one compares modern living with the lives of our more primitive hunting, gathering and farming ancestors.  But maybe it’s not that simple.  Maybe traditional society – which was all there was for the first six million years of human existence – features some assets that have been left behind in the inexorable drive toward “progress”.  Fortunately, there are still some people who continue to live in the traditional way and they might be able to teach us a thing or two.  In The World Until Yesterday, bestselling author Jared Diamond reveals many of the secrets of some of the remaining traditional societies from around the world, searching for gems within the vast panoply of human cultures that have preceded our computer age.

Before I go on, I have to share some words about the amazing Professor Diamond, a living example of a true Renaissance man.  After obtaining his PhD – in gallbladder cellular physiology –from Cambridge in 1961, he taught at Harvard and subsequently taught physiology at UCLA for many years.  At the same time, he developed an expertise in the ornithology of New Guinea and the surrounding islands, traveling there yearly and making numerous friends amongst the dozens of traditional human societies he encountered.   Based on these experiences he started writing popular science works in his 50s and changed fields to join the geography department at UCLA where he still teaches today at age 75.  Half of the fun of reading his books is marveling at the man’s ability to fit three distinguished careers into one lifetime.

This book is the third in Diamond’s series of cultural geography books.   He started with Guns, Germs and Steel: The Fates of Human Societies – which won a Pulitzer Prize in 1998 – and followed that up with Collapse: How Societies Choose to Fail or Succeed.   While all three books explore the geographical and cultural underpinnings of modern civilization, the first two focus on the historical aspects of the topic.  The World Until Yesterday brings some of the same ideas into the present, comparing a wide array of current (or recent) day traditional societies with the 21st century technologically advanced society that we all know and love.   While New Guinea is featured prominently – because Diamond knows it best, but also because it hosts about a thousand different cultures in an area the size of Texas – he also includes cultures from the Arctic, Amazonia, sub-Saharan Africa, Australia, southern Asia and western North America.

All human societies – modern or traditional – share numerous challenges.  They need to be able to deal with conflict both within the group and with other groups.  They also have to find a way to take care of the youngest and oldest members of the group with love and affection, while still keeping an eye on the bottom line.  In addition, they have to respond to danger – lions, disease, famine, natural disaster, snakes, and heavy traffic – in ways that aid survival of the group.    Diamond explores the myriad ways that different societies have dealt with these issues, including an extensive discussion of how religion, language and health practices have played a role. 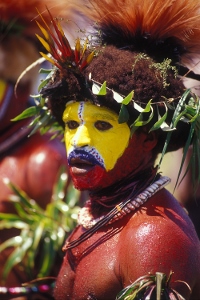 Diamond argues that while some traditional societies may have practices that we find abhorrent – infanticide, constant warfare and frequent food shortages – they also display behaviors that we could emulate.  He finds numerous changes we could make in our justice system, child rearing practices, education methods and health systems that would be good for modern society.  Just because a group of people eschews footwear, dons war paint and hunts with poison darts doesn’t mean they haven’t learned a thing or two about life.

Displaying an incredible amount of knowledge about a wide array of topics as he’s done in his previous work, Diamond adds a more personal touch this time with frequent anecdotes from his adventures in New Guinea and interactions with people whose first contact with modern technological society is still within living memory.  While the book is more than 400 pages long, I welcome these frequent diversions as they make the book much more than a standard college lecture.

In the end, The World Until Yesterday is a worthy addition to Diamond’s already formidable oeuvre.  It’s a fascinating look into humanity’s past from a truly remarkable scientist, birder, diplomat and writer.