Planet in a Pebble, The

Every Rock Has a Story… 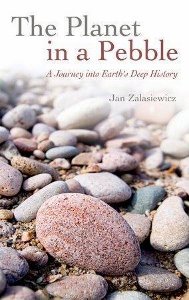 Slate rock.   Maybe some of the most boring words in the English language.  Certainly not a book topic that seems likely to generate a lot of enthusiasm.  But things are not always as they seem and with the right teacher even the dullest ordinary stone can be the source of countless stories and mysteries.   In The Planet in a Pebble, author and geologist Jan Zalasiewicz tells the story of a single pebble found resting quietly on the coastline of Wales.  And quite a story it is.

The selected pebble is not remarkable in any way.  It’s small and dark gray – weighing in at 50 grams, the equivalent of eight US quarters – with a few white streaks crossing it.  But right off the bat, the author provides a hint of what’s to come, revealing that even a small stone is made up of about a million million million million atoms of dozens of different types.    Gold, silver, platinum, even iridium – the rarest element in the Earth’s crust – are there in abundance, although diluted by their much more common neighbors.

Starting with the Big Bang, Zalasiewicz describes how these atoms came to be and eventually accumulated in the muds of an ancient Earth sea, destined to be slowly transformed into stone.   After spending eons deep beneath the Earth’s surface, our pebble-to-be was thrust up to form part of the ancient Welsh mountains, which eventually eroded into countless heaps of rock and debris.  Then after further tumbling by the tides, we’re left with an ordinary pebble on the rocky beach.  One among millions.

Of course, summarizing this 200+ page book in a few small paragraphs fails to do the topic justice, especially when the book itself is a summary of more than four billion years of Earth history.  Despite the daunting task, the author does a remarkable job of creating a readable and frequently breathtaking narrative.

Much is hidden in the pebble.  From the movements of Earth’s crust, to the dawn of multicellular life; from the formation of fossil fuels, to occasional ice ages, earthquakes and meteors, there is even recent evidence of humankind’s detonation of nuclear bombs.  I became overwhelmed just trying to keep track of all the different branches of scientific endeavor that Zalasiewicz invokes to tell the story.   From common topics like astrophysics, plate tectonics, mineralogy, oceanography and paleontology to more esoteric fields like geochemistry, palynology, geochronology, sedimentology and geomicrobiology.  The author’s ability to find so many different ways to explore one simple stone is rather astounding.   He even looks into the future and takes the last few pages to describe the fate of the stone and its constituent atoms as they eventually part ways and make their way through the universe.

I only have one quibble with this pebble story.  It may seem trivial and it really doesn’t impact on the overall quality of the book, but it’s a good example of a much larger problem.  As anyone who writes should know, it’s wise to have someone read your work before you publish it.  Even the greatest writer is bound to make some mistakes that an editor can correct.  Unfortunately, with the advent of computerized spell checking and editing, skilled human editors seems to be going the way of the trilobites.  I never would have thought that the chaps at Oxford University Press would succumb to this trend until I came across a passing reference to “Alfred Einstein”

[sic]** in this otherwise wonderful book.  I hope the publisher is embarrassed enough to hire more (or better) human editors as I’m confident that computers will never be “smart” enough to replace them.

From beginning to end, The Planet in a Pebble is a fascinating and wide ranging exploration of the birth, life and death of a simple stone, told with skill by an author with the scientific acumen and the impressive imagination to make it work.  It amazes to contemplate that each of Earth’s countless pebbles has its own similar but unique story as well.   Highly recommended for any and all scientific bibliophiles.

** Even the stupidest blunder can provide an opportunity to learn something.   Until now, I didn’t know that Alfred Einstein (1880-1952) was an accomplished musicologist and Mozart expert.  One of only a few areas of study that don’t appear to have much to say about our pebble.