It Takes a Witch 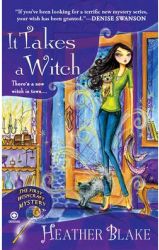 It Takes a Witch Cover

It’s no secret that I want to be Samantha Stevens from Bewitched when I grow up.  I know it isn’t going to happen, both because I don’t plan on growing up and because she’s, well, fictional, so I make do with the occasional “magic-lite” book.  You know, cozy type mysteries with benign witches and general tomfoolery.  It would seem that author Heather Blake read my juvenile little mind when she started writing The Wishcraft Mystery Series.  In the first book, It Takes a Witch, we meet our updated Samantha Stevens in the form of Darcy Merriweather.

It Takes a Witch takes place not long after Darcy and her sister Harper discover that they have magic in their heritage.  It seems that their mother was a witch and after her untimely death when Darcy was a little girl their father decided to raise them as mortals.  Only years later, after his death, do they discover through an aunt who they really are – they are Wishcrafters.

In this world (a small village near Salem, Massachusetts of course) there are mortals and there are crafters.  Not so different from witches and muggles, really.  Only the witches are forbidden to speak of their craft to mortals or lose their powers.  Each witch has specific powers determined by his or her bloodline.  Wishcrafters like Darcy do exactly what you’d think – they grant wishes.  Darcy and Harper are very new to this whole thing and learning the rules isn’t easy.  When one of the village residents is murdered it will come to no surprise to anyone who has ever read a book that Darcy straps on her sleuthing shoes to try and catch the culprit.

Like most cozy mysteries, the mystery isn’t the strongest point of It Takes a Witch.  The victim is nasty, the suspects are few and some easy clues are overlooked by our amateur sleuth.  But that’s really beside the point.  The real question is: do we like these people, this place and this world?  The answer, for me, is a resounding yes.  Darcy is a well conceived heroine, with a past that is hurtful enough for her to want to start over in this small village but not excruciating enough to completely paralyze her.  She’s a nurturer, having raised her sister, and embraces the idea of being a witch.

The peripheral characters are quirky (of course) with Darcy’s Aunt Velma leading the way.  Having brought Darcy and Harper to the village, she’s their primary source of information about the craft and the town filled with both mortals and witches.  Then there’s the obligatory love interest, Nick Sawyer, who is more interesting than your average Tall, Dark and Handsome.  Sister Harper doesn’t have a huge role to play in this first book, but she certainly has plenty of quirk potential.

Mostly I really like the premise and setting.  The witchcraft is light and fun, with just enough potential for a dark edge to keep it interesting.  And the village takes full advantage of its witchy heritage, filled with little boutiques (owned by quirky characters, of course) capitalizing on the legends of witches in the area.  Blake has managed to put together a world filled with magic and witches without any sparkly vampires or teen angst, making it light but with enough substance to the characters that you want to know what happens to them next.  4 stars out of 5 (one off for the weakness of the mystery) for It Takes a Witch and a recommendation for those of us who still wish we were Samantha Stevens and any cozy mystery lover.