Time travel may never exist, but it’s still fun to imagine what it would be like to venture back to a specific date in history.  If given the opportunity, classical music lovers could do worse than to choose May 7th, 1824 when Beethoven’s 9th Symphony premiered in Vienna.  In The Ninth, music writer and historian Harvey Sachs explores what it might have been like.

Sachs starts out with a bevy of biographical background which explains how Beethoven rose through the crowded ranks of a vibrant music scene to become one of the most famous composers of his time, picking up where Mozart and Haydn had left off and initiating the transition from classicism to romanticism.  He also provides some historical structure, discussing what life was like in Europe following the tumult of the Napoleonic Wars and surveying how this influenced the music of the time.

The author also examines Beethoven’s personal demons – most famously his gradual descent into complete deafness – and the profound effect they had on his life and psyche.  It’s not hard to understand why the great man cursed the gods for his fate, but like many challenges faced by a determined individual, this most cruel of disabilities seemed to add fuel to the composer’s passionate musical fire.

After using the first half of the book to lay all this groundwork, Sachs goes on to scrutinize the 9th Symphony itself, dissecting the entire piece in great detail and culminating in a meticulous analysis of the fourth movement, famous for the “Ode to Joy” with four voices and chorus.  During this part of the book, it’s crucial to have a recording of the piece available in order to follow along with Sachs’ prose.  While he eschews technical terms and adequately explains the ones he does use, I found the going a bit tough during this section, although it was worth the extra effort to actually listen to the music while reading.

Sachs finishes the book by discussing why the 9th Symphony had such a significant impact on the subsequent course of classical music, describing many of the personal reactions that later composers had to the work.   He successfully argues that it may be the single most influential piece in the history of classical music 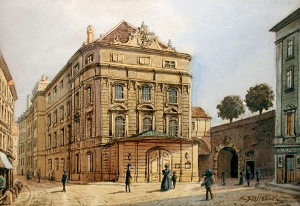 The Karntnertotheater in Vienna (c. 1830), site of the premiere.

“means”, but I think that Sachs strikes a reasonable balance, recognizing that much of his interpretation is his own personal supposition.  He provides plenty of objective evidence to support his opinions, but at the same time isn’t reluctant to vividly describe his own emotional reactions to the work, which adds an additional layer of interest to the book.

In the end, The Ninth is a detailed, well-researched and passionate exploration of a great man at the height of his powers that is complemented by some entertaining musical history writing.  I recommend it highly for anyone interested in classical music or music history, especially if Beethoven is high on one’s list of most esteemed composers – and how could he not be.