It’s a very rare circumstance under which I will say – to anyone – “you must read this book”.  Everyone has different tastes and while I might recommend something that I enjoy, I’m unlikely to thrust a copy into someone’s hands with 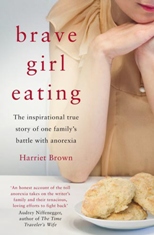 instructions that it will change how they see the world.  But Brave Girl Eating isn’t a regular book and I have just placed it firmly in my husband’s hands and said “you must read this book”.  If you were here in my house right now, chances are I would do the same to you – whoever “you” might be.  Everyone should read this book.  Seriously – everyone.  I don’t make such a bold assertion lightly.

Brave Girl Eating is the story of a family dealing with an anorexic teenager.  I fully recognize that by that description it sounds like nothing remotely special, forget compulsory reading for the general populace.  Author Harriett Brown set out to chronicle her family’s struggle with her daughter’s eating disorder and manages instead to let us into the terrifying world of anorexia and turn every theory I’ve ever heard, read or thought about eating disorders upside down.  If you’ve never lived through an eating disorder, put everything you thought you knew about them aside and listen to Harriett Brown.

Brown was unwillingly dragged into the nightmare of anorexia nervosa by her 14-year-old daughter’s affliction.  She paints a picture of an active, engaged, outgoing child – probably painting a more spectacular portrait than reality would support; a forgivable indulgence for even the most objective of mothers.  And looking back that child probably does look spectacular.  Anorexia changed the way Brown looked at her child – for a long, long time “ordinary” was beyond spectacular, seeming like an unattainable goal.

Brown pulls no punches- she tells her story with the candid fervor of someone willing to relive a nightmare in hopes that it may somehow, in some way, make it so that no one else ever has to live it.  She details her first awareness that something was amiss with her child, the steep descent into the belly of the disease and how severely not only her daughter, but her entire family was affected by the insidious affliction that was literally devouring her child from the inside, leaving a vicious, irrational skeletal shell in the place of her once vibrant daughter.  “Kitty”, the afflicted child, was unusually open and able to articulate some of what was happening in her mind.  She would occasionally be able to put into words her fears and demons, helping her parents form a plan to treat her disease that flew in the face of conventional wisdom about anorexia.

Brown faced years of theories about the etiology of eating disorders that simply didn’t match what she was seeing in her daughter.  As a journalist, her reaction was to research, exhaustively, the history, treatment philosophy, recovery rates and generally accepted medical models surrounding anorexia nervosa.  A talented writer and researcher, she intersperses her research into her personal story as we learn why she chose to do the things she did, why she rejected the prevailing wisdom and why she fights against it still.  The notion that anorexia is primarily a psychological disorder about control and not a physical disorder about food is one that she debunks over and over – through her own research as well as the research of others.

Brave Girl Eating is more than an interesting change in how to look at eating disorders, it’s also a gripping, exquisitely told story of a family in deep crisis with the life of a child at stake.  Brown is honest about her feelings, her actions, her isolation and a health care system that seemed hell bent on seeing her daughter become one of the 30% of anorexia sufferers who die from their illness.  She doesn’t demonize anyone, rather she fights hard for her child and if that means rejecting the assertions of local “experts” she’ll happily do it, though she’ll struggle with the fear that she’s wrong, that she’s making it worse, that the disease will win.

Our culture idolizes the thin and then demonizes those with eating disorders that make them skeletally thin against their will, calling it a choice and either mocking the severity of the condition or blaming the disease on the family.  Harriett Brown confronts the wicked unfairness of societal reaction to eating disorders frankly and without compassion for those doing the judging and name calling.  She calls out those who would make anorexia the fault of the parents, she calls out those who “wish they could have a little anorexia”, those who compliment her daughter on how thin she is, those who tell her she has to stop monitoring her daughter’s food intake.  She confronts them with research, evidence and her own personal struggles with an ugly, dangerous and potentially fatal disease that forever altered her daughter and her family.  And she does it with an unflinching eye toward changing the way we look at eating disorders and those who suffer their terrors.

I firmly believe that Brave Girl Eating is an essential book for nearly everyone.  Not just the parents of teenage girls, but anyone who has formed an opinion about what it is to suffer from an eating disorder.  I promise you that after reading Brown’s account you will never again look at the pencil thing woman walking miles a day or the man eating nothing but an apple for lunch year after year and judge them.  Harriett Brown has produced a masterpiece of compassion for a disease that is seldom afforded any such thing.

You must read this book.