Mind Your Own Beeswax

As a fan of both mysteries and beekeeping (seriously, we have bees), Hannah Reed’s Queen Bee series of cozy mysteries 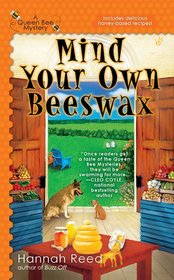 seems like something right up my alley.  After all, where else can one find the tension-filled excitement of capturing an errant swarm of honeybees and the thrill of solving a murder?  What’s not to love?

Our heroine in this series, and in this particular outing – Mind Your Own Beeswax – is Story Fisher, real name Melissa.  Story owns and runs a grocery store in a small Wisconsin town dedicated to selling local merchandise, including the honey and other items she produces from her dozens of backyard beehives.  The Wild Clover, as the store is called, is a hotbed of small town information, gossip and general buzz (oh, I am so funny).  When two local women are killed in a wooded area known to spook the locals, Story’s state policeman sort-of boyfriend and her local police chief arch nemesis are both involved in investigating the crime.  Of course, Story manages to insert herself into the case as her family and various other town eccentrics flit in and out of the book.

Mind Your Own Beeswax is a typical cozy mystery in many ways.  Plucky female protagonist, small town setting, wacky townsfolk and of course, the hobby hook.  Reed adds the allure of history – Story grew up in this small town and the past gets to show off in the book – but otherwise sticks to the formula.

What she fails to do is properly develop her heroine.  Oh, Story is plenty plucky.  She’s also relatively smart and hardworking and quirky.  Unfortunately, she isn’t particularly likable.  The cozy genre depends on us liking the people as much as the mysteries (usually more).  Story may be more real than most cozy heroines, as may be her uncomfortable family dynamic and tendency to be unfair to her boyfriend, but I don’t like her.  I don’t care if she wins, or if she is involved in catching the bad guy or if her store stays open.  She’s a closed, neurotic, unhappy woman with unrealistic and unfair expectations of her family, men and the world in general.  The denizens of her small town are no better and her family is significantly worse, especially her disapproving mother and lazy, irresponsible sister.

Overall Mind Your Own Beeswax is an average cozy mystery but a below average cozy book.  The formulaic plot is poorly served by the unlikable cast of characters leading to the lack of any desire to revisit them or their quirky little town.  2 stars out of 5, at least one of them added just because bees are cool.