It might be the opening line of a geek joke.  A paleontologist and a punk rocker walk into a bar.  But the unexpected punch line is that they’re actually a single person, someone like Greg Graffin, who surprisingly manages to incorporate these two widely disparate fields of endeavor into one body, excelling at both. 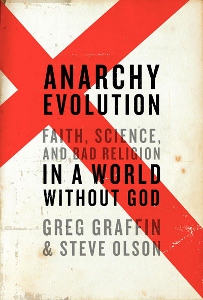 In Anarchy Evolution he tells his story, with the assistance of science writer Steve Olson.

At age 15 Graffin co-founded the band Bad Religion and gained some notoriety in the Los Angeles punk rock scene in the early 1980s, reveling in the anti-authoritarian approach to music making.   Somehow he also managed to stay in school, keep the band going and eventually receive degrees from UCLA and Cornell, returning to teach paleontology and life sciences at the both institutions.   He also continues in his role as lead singer and primary song writer for the band, touring internationally and producing over a dozen albums over the past three decades.

The book is a well-balanced combination of musical autobiography, evolutionary science and atheism treatise that entertains throughout.  Graffin actually eschews the term “atheist”, preferring the term “naturalist”.  He takes some time to simplify the terminology, separating human belief into two realms: monist and dualist.   The former believes that the natural world is as we see it and is entirely explainable through observation, experimentation and verification.  The latter believes that there exists a second realm that exists outside, yet impacts the natural world and is entirely unknowable via scientific methods of the present or future.  He successfully contends that this dichotomy gets to the real nub of the argument and that any belief system past or present falls on one side of the line or the other.

Graffin’s religious and scientific discussions are wide ranging and well composed throughout and with his thoughtful and pleasant writing style he may be able to avoid the accusations of harshness that have been heaped on other recent pro-atheism books.  He certainly doesn’t fit my preconceived notion of punk rocker, although he does revel in his opposition to authority in both music and science.

Despite my lack of punk rock knowledge – I had never heard of Bad Religion before — I also found Graffin’s musical discussions to be interesting; although 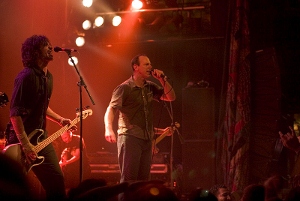 Greg and the band performing in 2005.

I’m sure that having a better sense of the genre would have helped me appreciate his words more.  After listening to some of his music now, all I can say is that he’s one incredibly energetic 47 year-old science geek.

I’m not sure who will enjoy Anarchy Evolution more:  music fans, science geeks or religious skeptics.  Maybe the appeal to all three is the greatest strength of the book.  It’s an entertaining and quick read that’s as unique as the man who wrote it.