Roman emperors have always been a great source for drama.  From Shakespeare to HBO, their heroic war mongering, decadence and hedonism have proven irresistible for centuries.   But it wasn’t always violence and debauchery.  In Julian, noted historical novelist Gore Vidal tells the 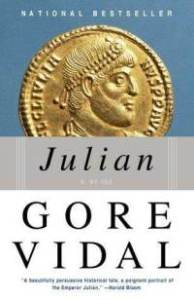 story of a different kind of emperor who eschewed sins of the flesh, choosing philosophy and celibacy instead.

Known as Julian the Philosopher, he reigned over an empire spanning from Britain to Persia and Africa from 361 to 363 AD.   However, Vidal finds his life worth commemorating due to his other less affectionate nickname: Julian the Apostate.  Nephew of Constantine the Great, Julian inherited an empire that had officially converted wholesale to Christianity, leading to vast changes throughout society over the previous several decades.  Despite a formal Christian upbringing, Julian’s philosophic studies convinced him that the older traditional Greek gods were the proper objects of worship, rather than a dead Jewish rebel.  This belief only became stronger as he was made Caesar and Augustus, driving him to try and make Hellenism – now disparagingly known as “paganism” – the imperial religion once again.

Deploying a technique that he made famous – particularly in subsequent works Burr and Lincoln – Vidal bases the entire novel on historical facts and extensive research, only making minor changes to aid the storytelling.  Julian’s life story is told after his death by two of his aging philosopher friends Libanius and Priscus as they discuss preparations to publish Julian’s memoirs in a potentially dangerous effort to rehabilitate his anti-Christian legacy.

I found Vidal’s exploration of this unique and complex leader to be quite riveting.  The dichotomy between Julian’s rational criticisms of Christianity and his unquestioning devotion to Hermes, Athena, Zeus, Apollo, Cybele, Mithras and many more is as puzzling as it is captivating.   His remarkable skills as a leader, philosopher, humanist and general are all on display, along with his constant devotion to pagan superstition – dream interpretation, oracles, séances, as well as animal sacrifice.  No great leader would ever want to make an important decision without first examining the fresh liver of a bull or sacrificing a thousand doves.

Vidal also makes the most of this opportunity to critique Christianity.  He reveals that most of the illogical and unusual aspects of this “new” religion were fully understood and popularized by fourth century critics.  Examination of a religion early in its genesis – before all the wrinkles have been ironed out – is often fascinating, Mormonism and Scientology being two modern examples.  Vidal doesn’t hesitate to ridicule the 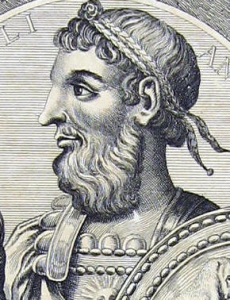 “Galileans”, despite the fact that most of his audience is probably Christian.  He’s sure to offend some, but I’m confident that he doesn’t care.

But where Vidal truly shines is in the storytelling.  Over four hundred pages on imperial Rome, ancient philosophy and Greek gods sound like a cure for insomnia, but in his hands, it’s compelling biography and history with plenty for the modern reader, including loads of gripping dialog, comic relief and plenty of twists and turns.  I think it’s fair to argue that his style of historical fiction is superior to traditional history writing, making for a more entertaining and memorable product, while still relying on the actual facts.

Julian is a compelling, albeit unflattering, look at Christianity’s rise as a world religion during the 4th century, as seen through the eyes of one of its most prominent opponents.  I strongly recommend it to those who’ve enjoyed Vidal’s other work, but would recommend Burr or Lincoln for those who are new to his historical novels, as they show him at the top of his form and are more accessible to the modern American reader.   It may not be prime material for a new Showtime miniseries, but it’s definitely good reading.