Book of Deadly Animals, The 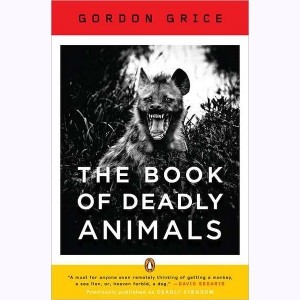 Prey or predator?  The status of humans in this dichotomy has not always been so clear.  In prehistoric times, even when wielding large rocks or clubs, we probably spent a fair amount of time in both roles.  Fortunately, the development of modern civilization has helped us gradually transition from the former to the latter category, but there are still plenty of creatures out there who may beg to differ.   In The Book of Deadly Animals, nature writer Gordon Grice explores the ways that the other members of the animal kingdom can still hurt us.  I’m confident when I say that if there’s some way for an animal to kill you, it’s in here.

It’s a little disconcerting to contemplate the astonishing number of ways that animals can hurt us.   Some stalk us because they’re hungry and they think we look tasty and vulnerable, others trample, strangle or disembowel us because they feel annoyed or threatened, yet others prefer to inject toxins into our blood while many inadvertently inoculate us with deadly microbial pathogens.

Grouping the animals into rough taxonomic categories, Grice starts with the carnivores, pointing out that even the adorable giant panda can beat the crap out of you if you’re not careful.  He then moves on to aquatic creatures, spending plenty of time discussing sharks, but also pointing out that groupers, orcas, octopi and even marine snails are all willing to hurt you if you’re in the wrong place at the wrong time.   Apparently, the unassuming stonefish has nothing better to do than to inject you with an excruciatingly painful venom if you accidently step on it.  If you’re fortunate, you might survive and only require amputation of the affected limb.  Grice also includes chapters about killer reptiles, birds, arthropods and more mammals.  Be warned, if you’re not cautious you could catch leprosy from an armadillo. 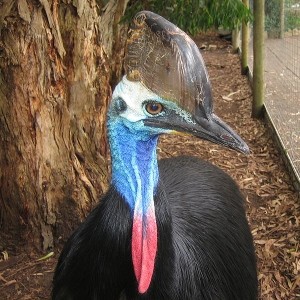 The southern cassowary may not know how to fly, but it’s more than happy to kick you to death.

The award winning Grice writes with a light-hearted, enthusiastic style, often including his own experiences with dangerous animals while growing up in the desolation of the Oklahoma panhandle.  The book is chock full of stories from all over the globe, from Australian celebrity sting ray victims to violent German bunny rabbits or Tanzanian baboons.  The gore gets pretty severe at times, if you can try and imagine what it’s like when a chimpanzee named Travis decides to chew your face off.

In the end, The Book of Deadly Animals is a surprisingly entertaining and comprehensive look at all the ways non-human animals might kill, maim or otherwise harm you.  While the entries are necessarily brief, at times they even serve an educational purpose, helping readers avoid the nasty venom of the hobo spider, for example.  While it seems that the book was conceived specifically with teen aged boys in mind, I can recommend it for anyone who enjoys nature writing or spends time in the great outdoors.  Be careful out there.  On second thought, you might just want to stay inside.