Broom With a View 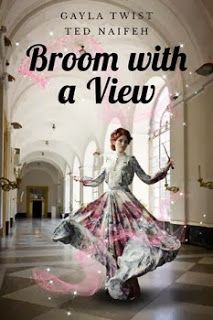 One of the things I enjoy most about YA fantasy novels is discovering the intricacies of the world in which the story will be set.  With boundless opportunity to step outside the scope of regular human experience (and physics), you never know what type of wonders might appear.  In Broom With a View, authors Gayla Twist and Ted Naifeh give us a tantalizing glimpse of what could be a very fun place to visit.

Broom With a View is the story of Violet Popplewell, a 16-year-old English witch living in the countryside with her mother and brother.  In her world, witches and sorcerers live alongside mortals and other magical creatures with some semblance of harmony.  Some of the mortals know about the magical world that surrounds them, others do not, or choose not to believe.  The witches generally do not go about performing large amounts of public magic – it just isn’t done.

As we enter the tale, Violet is about to set off on a journey with her elderly Aunt Vera.  There appears to be a war on the horizon between the witches and the vampires, something that has been brewing for many long years, and Violet’s mother would like her out of England for the duration.  Thus she is being allowed to visit the magical city of X, where all magical creatures live in the open, together and without discord.  While there, the pair finds more than their share of trouble, including entwinements with an elderly vampire and his brooding young son and a clever mortal with a son she would very much like see marry a witch.  Hijinks very much ensue.

The core premise here is cute, if a bit trite, as Violet finds herself torn between two men.  And the world in which the characters live is ripe with possibilities.  The city of X is teeming with both dark and light magic and there is obviously a long and complicated history of tension between the vampires and the crafting communities.  Unfortunately, the kernel of this world is pretty much all we get. The authors make their first stumble with something a good editor should have been able to iron out in the first draft – they use the third person omniscient and change their character perspective far too often.  It is difficult at times to figure out exactly whose head we might be in.

They also flip back and forth between the formal and the familiar use of character names much too frequently, leaving the reader with a poor understanding of the relationships between even the supposedly closest characters, like Violet and Vera.  The same holds true for the use of too much formal language used both in and out of dialog – this simple story would maintain its flavor with far simpler language and be much more readable.

Far more troubling is the thin story and world building.  With so many promising starts – the dark underground world beneath X, the cause of the young vampire’s brooding, the seeming magic of some mortals, and more – there are really no full stories to be found.  We end up with a shallow love story tacked onto a little limp political intrigue and lose all that promising flavor that we got to taste momentarily as each of the ultimately abandoned plot threads were introduced.

It’s too bad, there’s a really good start to a complex world, here.  Perhaps this is a first installment, but I see no indication that this is the case.  Even if it were, I would be unwilling to recommend Broom With a View, or a second book, unless some of the clutter with the POV were cleared up post haste.  The world showed promise that wasn’t realized and the editing is sloppy.  The simple story might be one that would appeal to reluctant readers, but the blunders with formal language make it unlikely that they would have the stamina to finish.  2 stars out of 5 for Broom With a View, no recommendation.