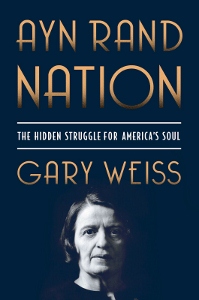 Another US election cycle is in the books and as usual – no matter what the result – I feel the need to take an extra shower or two.  But this time around, for reasons I can’t explain, rather than attempt to wipe the whole sordid spectacle from my mind, I opted to read a book about American politics.  While it seems that very little ever changes when it comes to presidential elections, the past few years have been marked by the rise of the conservative Tea Party, which had an undeniable impact on the 2010 elections as well as the subsequent race for the presidency.  An astute observer and successful journalist, Gary Weiss wondered what the driving impetus behind this new political force was, eventually coming to the conclusion that the most important person in US politics today never held public office and has been dead for 30 years.  Ayn Rand Nation is the result of his penetrating investigation.

I read Atlas Shrugged about 20 years ago and like many readers – Weiss cites data claiming that a third of the adult US population has read the book – I found it to be a uniquely riveting story despite the frequent blatant moralizing and long winded speechifying.  The success of this book in the 1950s, along with The Fountainhead, quickly turned Ayn Rand into a literary celebrity and small groups of passionately like-minded Objectivists sprouted up all over the country.  Rand’s championing of self-sufficient individualism struck a chord with readers, especially given America’s rugged frontier history.  But in recent years, Rand’s other core beliefs have begun to gain more traction, particularly on the far right of the political spectrum.  Her promotion of greed and selfishness as a moral virtues and her hatred of all things altruistic have begun to have an impact even if it’s never stated quite so baldly.

Weiss – an admitted East Coast liberal – doesn’t hesitate to make it clear that he opposes most of what Rand stands for and he provides potent rebuttals to many of her principles.  But his primary goal in this book is not to dismantle Rand’s philosophy, but to shine a bright light on it.  He successfully argues that liberals and moderates – and the whole country for that matter – dismiss Rand’s often wacky ideas at their peril.  Many of her beliefs have already had a significant impact how we view the interaction between big business and big government.

Weiss spends much of the book seeking out Rand acolytes, trying to find out what makes them tick and why Rand has had such an impact on them.  He encounters individuals of varying levels of philosophical sophistication, but even if many of their arguments seem to be directly regurgitated from Fox News, he treats them with respect and mostly lets them speak for themselves.  He struggles but eventually succeeds in finding Rand supporters he can actually argue with, which is when the book really becomes most interesting.  His play-by-play coverage of a 2011 debate between Yaron Brook for the Randians and Miles Rapoport for the East Coast Liberals makes for surprisingly exciting reading, given that the debate topic was  the role of the federal government.

Throughout the book Weiss actually takes it pretty easy on Rand, treating her with respect that she may not have actually deserved.  But he takes the gloves off when he starts talking about Alan Greenspan, one of Rand’s closest disciples, having worked closely with her for many years prior to becoming Chairman of the Federal Reserve where he served from 1987-2006.  Weiss argues that Greenspan, more than any other individual, is responsible for the gradual dismantling of the essential governmental regulations that keep the capitalist system from eventually destroying itself.  Weiss articulates the flaws in laissez-faire capitalism with a passion and skill sorely lacking in today’s supposedly liberal politicians.

Which brings me to my only criticism of the book.  Weiss is too much of a Clinton and Obama apologist.  He conveniently glosses over the fact that both presidents have played their own significant roles in the rightward drift toward a Randian version of capitalism.  Although both men are smart enough to know better, they went right along with the push for minimizing regulations and protecting those who violate them. If liberal politicians supported even a fraction of the ideas that Weiss espouses in his book the economy would be a lot healthier and more fair than it is.

In the end, Ayn Rand Nation is a well written, engaging and often passionate look at the improbable rise to political prominence of a little Russian Jewish woman whose impact on American politics is likely to endure for years to come.  An important book for anyone interested in rebalancing the economic world we live in.