Fate of the Species, The 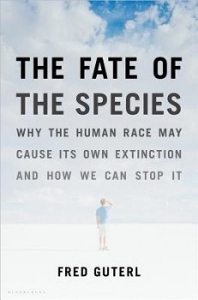 Some animals seem to be built for the long haul – various crocodiles, sharks and turtles have wandered the earth for hundreds of millions of years.  While other species – like the dodo, the Irish elk or the polar bear – quickly find themselves in an evolutionary dead end, often the victims of geographic isolation or over specialization.   It remains to be seen which category Homo sapiens belongs in.  Despite our high scores for adaptability and useful traits like omnivory and intelligence, the odds may be stacked against us.  In The Fate of the Species, science journalist Fred Guterl explores the many ways humanity could go the way of the passenger pigeon or the wooly mammoth.

Although it would also be interesting, the book doesn’t even begin to explore how various natural disasters could cause our extinction – a massive asteroid collision, a sudden increase in volcanism or a devastating solar flare.  Instead the book focuses on the numerous ways that humankind can cause its own demise.

Starting with a discussion of the various mass extinctions that have punctuated Earth’s past, Guterl goes on to identify five major categories of self-induced societal collapse and subsequent human extinction.

The first three qualify as somewhat passive routes:  a supervirus with the lethality of Ebola and the contagiousness of influenza could wipe out a large percentage of the population;  the ecosystem on which we all rely, could eventually collapse as more and more essential pieces are eliminated by human activities; or our continued efforts to burn every last drop or chunk of fossil fuel could cause climate change to transform into a runaway greenhouse effect – also known as The Venus Effect – making the planet uninhabitable.

The last two are much more malevolent: advancing techniques in biotechnology and genetic engineering make it more and more conceivable that someone will be able to design a bioweapon – like synthetic smallpox – with the ability to kill hundreds of millions worldwide; or cyber terrorists may be able to create computer viruses that take down the entire North American power grid, leading to complete economic collapse.  The latter category may be the most disturbing as Guterl reveals how our computer interconnectedness and interdependence make modern society so vulnerable.

Despite the depressing topic, Guterl writes with skill and kept me riveted.   It’s not every day that you get to read about your own extinction.  Throughout the book he repeatedly circles back to the concept of the “tipping point”.  What percentage of the human population has to die from a supervirus to destroy civilization as we know it?  How much carbon dioxide and methane has to be spewed into the air before our hospitable climate irreversibly collapses?  How much of the power grid has to be disabled before the US economy goes into free fall, taking the rest of the world with it?  Guterl’s efforts to answer these kinds of questions make for some gut wrenching reading.

Does our much vaunted human ingenuity contain the seeds of our own destruction?  The Fate of the Species explores this important topic with plenty of research and rumination, as well as some possible remedies.  While it’s not for the faint of heart, it’s a worthwhile read about some plausible and not so distant futures.