Bonobo and the Atheist, The 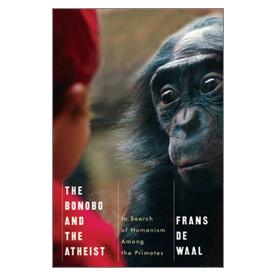 When Michael Jackson dangled his 9 month old baby off the fourth story balcony of a Berlin hotel in 2002 with one hand, no one had to think twice to view the act as morally obscene.  It sounds stupid to even have to say it, it’s so immediately obvious.   But how do most of us know right from wrong?  Where do the answers come from?  In the past, humankind’s moral compass has been viewed as something that separated us from the other animals.  Many cite our morality as one of the most important benefits of a religious upbringing.  But recent research has begun to reveal that the origins of morality may go back millions of years before the dawn of religion.  Our primate ancestors exhibit a sense of right and wrong that is easily recognizable as similar to our own, as do other social mammals like elephants, dogs and whales.  In The Bonobo and the Atheist, one of the world’s preeminent primatologists explores the origins of human morality.

Dutch biologist Frans de Waal has studied and written about chimpanzees and bonobos for most of his career.  His office overlooks one of the chimpanzee enclosures at the Yerkes Primate Center in Atlanta, which is affiliated with Emory University and the Centers for Disease Control.  From his desk he’s able to watch the apes squabble, cooperate and console each other all day long.  Over the decades, his studies have been instrumental in revealing many of the similarities between human and chimp psychology. 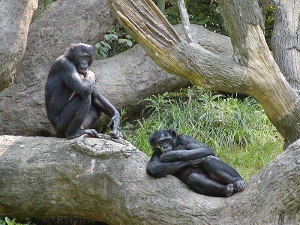 Bonobos lounging at the Cincinnati Zoo.

In this book he discusses how observational and experimental studies have shed light on how morality may have evolved in the apes.  He tells how chimps perceive injustice, how they work together to punish socially unacceptable behavior and how they often go out of their way to support a companion.  Given our proximity to these apes on the evolutionary bush, it’s clear that our common ancestor several million years ago must have already exhibited these “moral” behaviors.  He also spends some time exploring the difference between the chimpanzees (hyper-violent) and their closest relative the bonobos (hyper-sexual) and delves into the thorny question of which ape most closely resembles us.

As the title suggests, de Waal also has a few things to say about atheism.  If the foundations of morality originated in our ape ancestors, why is religion necessary?  Did we invent religion, simply to codify our innate moral sensibilities?  While de Waal has some clear opinions on this topic and comes down clearly in favor of apes rather than an omniscient, super-natural being as the source of religion, he doesn’t hesitate to disparage the current cadre of best-selling atheist writers, who he feels are too shrill, unnecessarily antagonistic and rude. 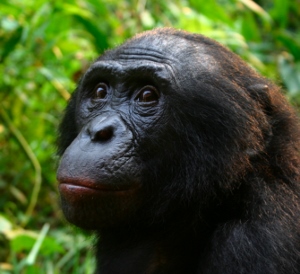 A male bonobo at a nature reserve in the DRC.

Lastly, I was surprised to find that de Waal is an aspiring art historian, as well.  Effectively sprinkled throughout the book, providing an interesting source of cohesion for the various topics, de Waal reveals his fascination with his countryman Hieronymous Bosch (1450-1560) and his most famous work In the Garden of Early Delights, a remarkable triptych which displays much about the Renaissance view of morality and religion.

Combining the essential ingredients for any successful science book, De Waal is an accomplished scientist who transfers his passion to the page with great skill.  He doesn’t hesitate to take a stand on controversial issues and then backs them up with compelling evidence.  He’s been in the field long enough to have earned the right to say “I told you so” more than once.

In the end, The Bonobo and the Atheist is a compelling work for anyone interested in animal behavior, religion or great science writing in general.  It’s an eye opening exploration of what makes humans the way they are and why, as oft quoted philosopher Dr. Frank Burns so wisely noted, “It’s nice to be nice to the nice.”

photos by Greg Hume and Evanmaclean