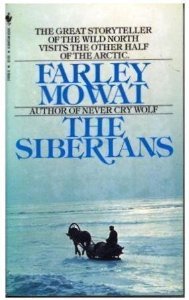 Even today it’s not easy for Americans (or Canadians) to know what life is like for the average person in the depths of Siberia, but in the 1960s, at the height of the Cold War, it was a complete mystery.  So when acclaimed Canadian author Farley Mowat – with several popular books in the Soviet Union – was invited to visit by a Russian writer, he jumped at the chance.   He was interested in comparing life in Siberia with the North American arctic that he knew so well.  Published in 1971, The Siberians is the result of his extensive travels through the vast landscape of eastern Russia known as “the sleeping land”.

Although the definitions vary, for simplicity’s sake it’s reasonable to define Siberia as all of modern day Russia east of the Ural Mountains.  Bordered by the Arctic Ocean to the north, the Pacific Ocean to the east and Kazakhstan, Mongolia and China to the South, it encompasses about a third of the Asian continent or about ten percent of Earth’s land mass.   Needless to say, an area this large features a vast amount of geographical and ethnic diversity, more than can be covered in one book.   Most of Mowat’s travels – frequently he’s joined by his wife Claire – center around the city of Yakutsk, at about the same latitude as Anchorage, Alaska.  But due to its location in the middle of the continent it experiences much nastier weather extremes, with an average temperature below freezing for seven months a year and an average high temperature in January of minus 31°F, qualifying it as the coldest city in the world.  Much of the book is spent exploring how the people struggle to develop a modern economy when opposed by such a formidable obstacle.

During his travels, Mowat’s primary focus is the people, particularly the ethnic groups that populated the area before the Cossacks invaded from Eastern Europe and before Stalin sent his enemies to dig for gold in the forced labor camps.  He meets a wide array of people, like the Yakuts, Evenkis, Yukaghirs and the Chukchees, close relatives of the Eskimos (called Inuit today, although that’s a different story) of Alaska and Canada.  Mowat is pleased to report that the native peoples of Siberia appear to be faring much better than their brethren in North America.

Each chapter of the book explores a different location; like the city of Tchersky on the Arctic Ocean , one of centers for the vital icy shipping corridor; and the city of Magadan on the Sea of Okhostk, a previously forbidden city that held the gold to fund the Soviet efforts in World War II.  Frequently welcomed as a celebrity, Mowat makes numerous energetic and amazingly hospitable friends, visits a lot of kindergartens , drinks copious (almost lethal) amounts of vodka and cognac, but still finds time (and liver cells) left to describe some of the details of permafrost engineering, reindeer husbandry, gold geology and the jewel that is Lake Baikal.

Mowat admits that he knew next to nothing about Siberia before his trips and some of the places he visits had had no Western visitors in the Soviet era, but most of what he learns is surprisingly upbeat, to the point that it gets a bit tiresome at times.  Now Mowat is not a journalist or scientist, he’s just a writer known for his significantly left-leaning political views, so maybe he’s too quick to gobble up the happy, sanitized view of the country that he’s presented.  But even in the 1960s, the man wasn’t born yesterday and Yakutsk is a harsh 5000 miles from the command center in Moscow, so I find it plausible when he says that he never felt manipulated by the Soviet propaganda machine, pointing out that the Soviets are mere amateurs when compared to Western marketing experts. 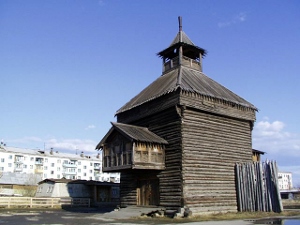 A replica of a 17th century Russian fort, or ostrog, in Yakutsk.

As I sat down to read this book, I stopped to ask myself why.  The book is more than forty years old, which is old for a book (not people) whose topic is a country that no longer exists and an economy that has been completely transformed.  Even the climate’s changed.  But given all of those limitations, I still enjoyed the book.  Mowat is a talented writer and while much of what he writes and much of what the optimistic Siberians he meets say seem hopelessly naïve today, it was pleasant to read about people who still care about their world.  Maybe they still exist.

In the end, The Siberians is a highly personalized time capsule from a brief moment in the history of the Soviet Union.  It’s been many years since I enjoyed Mowat’s classic Never Cry Wolf (translated into Russian as Wolves, Please Don’t Cry) and I’d forgotten how much I enjoy his writing.  While this is a very different book that’s crying out for a sequel to bring us to the present day, I can still recommend it for Mowat fans or those interested in Soviet history.   Readers who are new to Mowat’s work should probably start elsewhere.