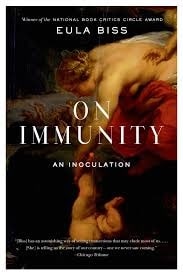 Did you get your flu shot this fall? If you haven’t, you should.  It may seem obvious, but every flu shot that’s given protects not only the recipient, but everyone they come in contact with, thereby reducing the number of cases of flu each year.   And with thousands of deaths in the US each year due to flu, a momentary twinge of pain isn’t much to ask to help prevent a potentially serious disease.  If you find my argument unconvincing, I recommend On Immunity, a remarkably thoughtful exploration of the world of vaccinations, by author Eula Biss.

As a liberal, an intellectual and a teacher, Biss – a senior lecturer in the English Department at Northwestern University – delves into loads of research as she starts her first pregnancy and subsequently delivers a healthy baby boy. Worried about toxins in food, mattresses, baby bottles – even her own breast milk – she strives to provide a safe, chemical free environment for her son.  Given that the CDC recommends dozens of shots for children – 49 doses of 14 different vaccines by the age of six as of 2013 – the safety of these injections is at the forefront of her increasingly overwhelmed maternal mind.  The more she discusses the topic with her neighbors and colleagues – many of them also writers and new mothers – the more she encounters vaccine opposition.  Implicated as the cause of autism, mercury poisoning, seizures and attention deficit disorder (to name a few), vaccines have been under increasing criticism as a malicious tool of big pharma and big government.  Deftly weaving her way through this minefield of fear, confusion and paranoia, Biss tries to make sense of this contentious topic, producing a remarkably readable and poetic treatise.

With a wide ranging discussion – from Rachel Carson to Count Dracula – Biss explores the ubiquitous fear of contagion, contamination and disease. Providing historical and scientific context, she anchors much of the book to her travails as the mother of a chemically sensitive son.  She skillfully weaves the story of early motherhood into her efforts to understand modern vaccine controversies.

Get your flu shot!

While she’s not reluctant to criticize the government when it comes to its economic or foreign policy, she also recognizes that vaccines probably don’t represent the forefront of a vast governmental conspiracy. The reality is that before widespread vaccination programs began in the 1980s, measles killed 2.6 million children worldwide every year.  Now the number is down to 122,000 as of 2012.  Just because dying of measles at age four is entirely “natural” doesn’t mean it’s a good thing.

While I’m sure Biss will encounter plenty of criticism from the “anti-vaxxer” crowd and while I probably like On Immunity as much as I do because I agree with her conclusions, I think that the book succeeds at providing a balanced approach to a fascinating topic.  People may accuse of her of many things, but Biss certainly isn’t a capitalist stooge in the pocket of the pharmaceutical companies.  She comes to her conclusions honestly and with a healthy dose of skepticism.  Compellingly and beautifully written, I can strongly recommend this work for anyone who values their immune system or who needs a reminder to get their yearly flu shot.

Our review of an award-winning Eula Biss essay collection, Notes from No Man’s Land.