Queen of the Tearling, The (Book 1) 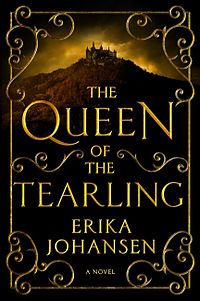 Full disclosure: I am not a fantasy fiction connoisseur. Not that I dislike it, but I haven’t read a lot. I seem to get bogged down by too many characters and bored with political intrigue in so-and-so’s medieval court. So it was with no small amount of trepidation that I dove into Erika Johansen’s first book in a fantasy trilogy, The Queen of the Tearling. I had nothing to fear, for this author’s debut novel blew me away.

The Queen of the Tearling is the story of Kelsea. At the age of 19, she is being taken from the care of her long time foster parents by the Queen’s Guard. She has been hidden for nearly her entire life, preparing for the day when she would be escorted to New London to take her rightful place as Queen. She is frightened, of course, and resentful, but thinks she is prepared. She is woefully wrong.

The Tear is a land of farmers and nobles, servants and masters. Kelsea is marked for death the moment she is taken from hiding – her uncle currently occupies the throne and has no desire to give up his opulent, lascivious lifestyle. Her guard is wary – she knows so little of the actual state of her kingdom (her foster parents swore to never reveal details about the reign of her mother) and is so young that they see her as a foolish girl, destined to follow in the footsteps of her foolish mother. If she even makes it to the throne, which they very much doubt. Through this first journey we begin to know Kelsea, as well as a few of the men who have sworn to deliver her safely to the Keep (as is known the castle). Intrigue, magic, treachery and betrayal will follow Kelsea like a curse as she tries desperately to become the queen that her mother was not. And it is through this struggle that we meet her enemies, faithful servants and those who live in despair for want of a true ruler.

The Queen of the Tearling is definitely set in the world of medieval court politics, a world that Kelsea has studied but never lived. But one of the things that makes this book so thoroughly captivating is that it is not set in some nebulous past, but in some sort of dystopian future. The Tear and her neighbors have only existed for a couple hundred years, having been founded by a utopian following something known only as The Crossing. We learn bits and pieces about that event, just enough to whet our appetites and make us want to know much, much more.
We also learn about the Tear neighbors, including the malevolent Mortmesne, which used to be called New Europe. It has been ruled for a century by the Red Queen, through fear, intimidation, and cruelty. Now with a new queen on the way, what will happen to the shaky and entirely brutal peace agreement between the two kingdoms? Who will become an ally to Kelsea, who an adversary? AND WHY CAN’T IT ALL BE IN ONE BOOK??

That’s my only real complaint about The Queen of the Tearling, I desperately want to read the next installment. This first one is satisfying in many ways – we come to know our main characters and follow along as Kelsea learns that bad is sometimes not so bad and good can be terribly deceitful. We get a good feel for the Tear land and its peoples and problems, as well as its ugly secrets and scabrous underbelly. There’s some ripping good action and just a tiny glimmer of romance (almost none, another thing that absolutely endeared me to the story – no man hanging around to make Kelsea swoon and become a damsel in distress). Kelsea is strong, learns fast and it’s delightful to watch her change from the timid girl raised in exile into something else altogether, even in the first days of her journey towards the Keep.

The Queen of the Tearling is tightly plotted, superbly paced and has everything a good first series book needs – great characters, a multi-layered setting and plot structure and terrific bad guys. A solid recommendation for anyone with even the slightest interest in fantasy fiction.