Popular culture tends to portray small towns as places where everyone knows everything about everyone else.  Every scandal, misfortune or eccentricity is passed through the small grapevine until nothing is secret.  Olive Kitteridge lives in 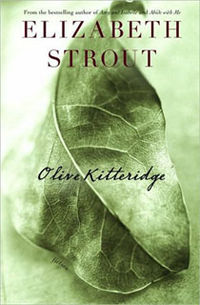 a small town and through her eyes and her life we come to understand just how much people do not know about those among whom they have lived their whole lives.

Olive Kitteridge is an interestingly presented novel.  Each chapter is its own vignette, telling a small slice of the life of one person, couple or family.  Sometimes the reader is learning things through the filter of Olive, other times she is but a mere bit of the background.  The one thing all these people have in common is that they share the same small town.  As we move through the chapters we begin to form a picture of both the town and Olive.  The book does not take place in a single time period but jumps around through the years of Olive’s middle age and beyond.  One vignette may take place while she is still teaching school, the next when she is long retired.  When we see the world through Olive it’s when she is an older woman, dealing with the hardships and regrets of aging.

Olive is a large, strong, opinionated woman.  She’s married to Henry and they have one son, Christopher.   Olive taught the seventh grade for many years and much of the younger population of the town see her in that role, no matter the number of years passed.  She is very much a part of this particular small town – everyone knows who she is, everyone likes her husband and her presence is interwoven through much of the essence of this place.  She is a solid, predictable presence.  At least that’s what people think.

We learn otherwise.  We see not only her brusque outer shell but also her dashed dreams, emotional fragility and self-doubt.  Like everyone, Olive Kitteridge presents herself in one fashion but is far more complicated than her public persona.  We also come to understand how fragments of the town resident’s lives and experiences make their way into the local culture.  Everyone is, in their way, like Olive – one person to the world and another, far more complicated and messy, person when the curtains close and the town fades into the background.  Each vignette illustrates some element of life in a small town and what it means to grow up, live or relocate there.  Overarching the daily struggles of the populace is the primary theme of the struggles of aging – the losses, regrets, loneliness and isolation that can set in, even in a place where everyone knows you.  Many characters throughout Olive Kitteridge struggle with change, aging, loss and the struggle to adapt one’s outer shell to a new inner reality.

The book is beautifully written.  The prose is spare, the stories often brief, offering only a glimpse into a life.  The reader is allowed to put together the pieces of this place, these people and fit them into a whole – fill in blanks and create an impression for themselves.  Exactly the way we do in real life.  As a main character, Olive is going to be viewed very differently by different readers.  I found her cold, hard exterior as frustrating as her inner empathy and self-doubt was endearing and sometimes heartbreaking.  Author Elizabeth Strout paints a marvelous picture of the woman, her town and her place in the scheme of life’s events using far fewer brush strokes than one would expect.  The effect is like peeking in windows and forming a story of how all of these lives somehow fit together.  It’s engaging and unusual and thoroughly enjoyable.  4 stars and a hearty recommendation for Olive Kitteridge.