The Worst of the Weeds… 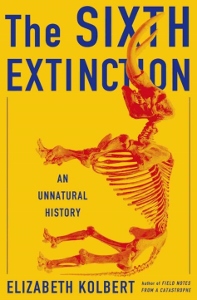 There’s little debate that humankind has had a significant impact on the Earth’s biosphere, particularly over the past few hundred years.  From the demise of the dodo to the melting of the polar ice caps, our muddy thumbprints are all over the planet.  An argument can be made that humanity’s impact on life as we know it has been so profound as to rank it with the other periods of mass extinction in life’s ancient history, the most famous being the asteroid that wiped out the dinosaurs – as well as 75% of all other species – about 65 million years ago.  In The Sixth Extinction, environmental journalist Elizabeth Kolbert explores this idea, pondering how different the planet might eventually look once we’re finished with it.  It’s not a pretty picture.

With plenty of courage and enthusiasm, Kolbert spans the globe to learn more about extinctions of the past and present.  She travels to the highlands of Scotland to check out 450 million year old fossilized graptolites, one of the many victims of a worldwide ice age that wiped out 60% of all existing species.  She also heads to the small town of Gubbio, Italy to check out the evidence for the 65 million year old asteroid impact that took out 75% of all species, including the famous non-avian dinosaurs, as well as the diminutive ammonites – a group of mollusks that had flourished for the preceding 300 million years. 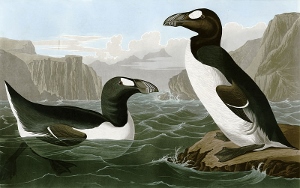 Audubon’s rendition of the Great Auk in the early 1800s.

Kolbert goes on to hunt down some of the first extinctions that resulted from Homo sapiens’ ambitious ways, from the enormous mastodons – which used to roam the wilds of North America until they exited 10,000 years ago – to the Great Auks – the northern hemisphere’s answer to the penguin – which succumbed around 1850.  Unfortunately, it appears that we were just getting started. 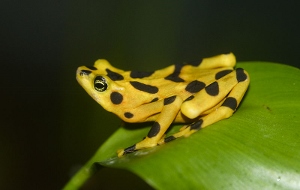 Frogs in Panama, bats in New York State, coral reefs in Australia, rhinos in Sumatra, Amazonian species by the hundreds, they’re all in population free fall.  Kolbert writes about them all with plenty of passion and stoicism, but the book isn’t as gloomy as it sounds.  The author manages to keep the topic bearable by injecting a dose of self-deprecating humor at times as well as plenty of wonderment at our amazing natural world and the hundreds of heroic humans that are striving to preserve what they can.  Her frequent acts of fearless derring-do and agile writing style remind me of the intrepid David Quammen, another great nature writer and one of my favorites.

While it’s unavoidably depressing at times, The Sixth Extinction is as inspiring as it is sobering.  It’s never whiny or judgmental and turns out to be a thoroughly engrossing look at the future fate of our natural world.  Written with plenty of adventuresome flare and wit, I can enthusiastically recommend it to anyone who enjoys quality nature journalism.