Sound of a Wild Snail Eating, The

Sometimes great art can be the equivalent of a postage stamp.  Whether it’s a Chopin prelude, the Mona Lisa or a Stephen King novella, the audience can take pleasure in a diminutive and finely crafted product.   The same is true for great nature writing.  While topics like Antarctica, 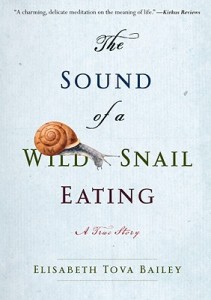 great white sharks or the tropical rainforest can fascinate, sometimes a simple snail in a bedroom can be equally captivating.    In The Sound of a Wild Snail Eating, writer Elisabeth Tova Bailey proves this thesis in convincing fashion.

Struck down by a mysterious illness at age 34, Bailey is forced to spend many months in bed, often unable to even sit up.  In an effort to supply moral support, a thoughtful friend brings her a small houseplant and a wild snail that she collected in the nearby woods.   Bailey’s unsure what to make of her new house guest, but given that she literally has nothing else to do she starts watching.

Initially, the snail spends the day resting on the bits of loose moss covering the houseplant’s soil, but she (or he) rapidly grows accustomed to her new surroundings and embarks on wide ranging nocturnal explorations throughout Bailey’s sick room.  After noticing small nibbles on envelopes, Bailey realizes that the snail needs a more traditional habitat and – with the help of friends – sets up a well furnished terrarium.

Over time, the author becomes increasingly caught up in the snail’s many mysteries.  How does it view the world?  How does it make such a perfect spiral shell?  What’s hermaphrodite sex like?  What’s up with all the slime?  Drawing strength from her new friendship and calling on her local library, she initiates an exhaustive mollusk research program from her bed to find answers to these questions and many more.

Bailey provides loads of interesting snail information in a graceful and entertaining style, successfully arguing that these ancient and ubiquitous 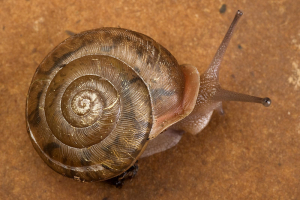 creatures are worthy of more respect than they usually receive.  Dozens of charming snail portraits by Kathy Bray accompany the text and add a pleasant touch to Bailey’s fine prose.

In addition to learning plenty about snails, I was moved by Bailey’s medical story.  While it doesn’t seem too surprising that traditional warm and furry pets might help a patient recover from an illness or trauma, I really didn’t expect a cold, slimy gastropod to be able to fill that role.  By telling her snail tale, Bailey presents an unusual glimpse into the healing process and suggests that the snail probably helped her more than her many doctors.

A small but exquisitely conceived and executed volume, The Sound of a Wild Snail Eating is a joy to read and ponder.  Even a creature as small and quiet as a snail can impact a human life in a powerful and meaningful way.