Killer of Little Shepherds, The 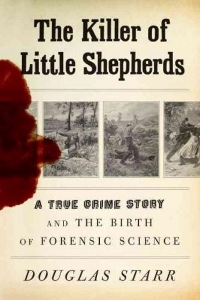 He was one of the most fearsome serial killers of the 19th century, terrorizing the denizens of the French countryside for much of the 1890s.  Yet the criminal science of the time was so primitive, that it wasn’t until he’d killed his 27th victim that Joseph Vacher was finally captured and convicted.  In The Killer of Little Shepherds, Boston University professor Douglas Starr tells Vacher’s gruesome story, as well as the story of the heroic criminology pioneers who caught him.

Growing up poor and attending a strict Catholic school, Vacher appears to have always been a bit odd and off putting, but it wasn’t until he began obsessing over a local young maid that things really began to fall apart.  Upset over her rejection of him, he shot her four times – none lethal – and then shot himself in the face – with relatively minor injuries.   This act resulted in his confinement in a local mental institution, where he his was declared “cured” and released in less than a year.  He then proceeded to embark on a three year killing spree, roaming the countryside on foot, hiding in the woods and overpowering young men and women, concealing their mutilated corpses and quickly moving on to a different French department, leaving the local officials clueless.  Working to his advantage was the fact that the economic instability of the time resulted in thousands of “vagabonds” wandering the country looking for work and begging for food and shelter.  Vacher was able to blend right in with this crowd and shrewdly avoid detection.

Starr tells of Vacher’s horrific exploits with skill and includes many interesting asides about late 19th century France.  But while the whole story is plenty gruesome, the author deftly balances the gore with an exploration of some of the earliest steps in criminal science. Contemporaneously with Vacher’s brutal escapades, two heroes of French forensics were in ascendance and both played a crucial role in the killer’s eventual conviction.

Dr. Alexandre Lacassagne was one of the first scientists to approach the crime scene and the murder victim’s body in a scientific and systematic manner. 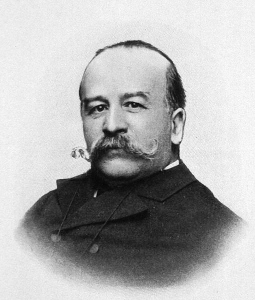 Starr describes the doctor’s numerous discoveries and the efforts he made to improve and standardize the investigation of a crime.  He brought the legal system out of the dark ages and many of the techniques he devised can still be seen in any modern television crime series.

Despite being overly clinical at times, the book builds nicely to a satisfying finale, describing the sophisticated psychological maneuvers of the local prosecutor, Emile Fourquet.  Relying on some of the newest concepts in the budding science of criminology, Fourquet’s efforts reminded me of an interrogation scene on CSI or Law and Order.

Throughout the book, Starr does a nice job of keeping the reader guessing regarding Vacher’s sanity or lack thereof.  At about this time in France and elsewhere in Europe, compassion was building for those with mental illness and the idea that an insane individual might not be truly responsible for their actions was gaining acceptance.  Starr deftly explores the difficulty the law had in dealing with this conundrum, as it does even to this day.

More crime science book than crime thriller, The Killer of Little Shepherds is a well balanced, well researched true-crime story that provides plenty of gore, history, science and suspense.  An entertaining and informative book for fans of police procedurals or for anyone who’s interested in learning about the origins of many of the techniques used on their favorite TV crime shows.