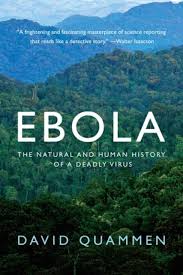 Every so often an author writes a book at just the right time. In 2012, acclaimed science writer David Quammen published Spillover, a vast and gripping exploration of the increasingly frightening world of zoonoses.  These infectious diseases – mostly a plethora of exotic viruses – are primarily found in non-human animals, but occasionally infect humans, leading to sporadic outbreaks.  Just over a year after publication of this award winning book, a new case of Ebola virus disease – first identified in 1976 – appeared in the West African country of Guinea, which rapidly erupted into a major epidemic, killing thousands.  Now a household name, generating fear worldwide, Ebola virus – suspected to usually hide out in quietly unaffected tropical fruit bats – has now managed to spread intercontinentally, creating an evolving global health crisis that is likely to get worse before it gets better.  In response, Quammen has released Ebola, excerpting, expanding and updating much of the material from Spillover, including a closing chapter that brings the story into the present day (September 2014).

Known for his intrepid – often ill advised – journalistic excursions, Quammen is at his best here, spending weeks wandering the jungles of West Africa hoping that the cook doesn’t throw any unauthorized bushmeat into the stew. He also visits with dozens of researchers – virologists, epidemiologists, mammologists – in order to try and understand this enigmatic virus, which is so virulent that it’s almost impossible to study properly.  Deftly creating a coherent story from fragmentary details, he recounts the numerous outbreaks over the past several decades and tries to piece together the origins of this increasingly worrisome scourge.  In my experience, Quammen has no equal when it comes to in-depth science or nature journalism and this book is no exception.

A colorized transmission electron micrograph of the Ebola virus.

While those who’ve read Spillover won’t find much new information here, I can strongly recommend Ebola to anyone who wants to learn more about origins of the current epidemic.  It provides a sober, thoughtful and balanced perspective that can be difficult to find on line or on the nightly news shows.

virus image by Cynthia Goldsmith at the CDC

Check out the Readers Lane review of Spillover.