Footnotes on the Forecastle… 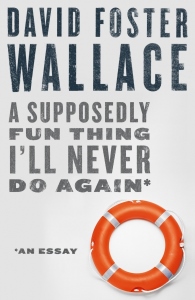 What makes something funny?  Is it the bizarre story, the unique characters or the style of the delivery?  How crucial is it that you be a member of the target audience?  Or is it all much more intangible than that?  These kinds of thoughts were frequently flopping around my brain as I read A Supposedly Fun Thing I’ll Never Do Again, a comedic essay by David Foster Wallace.  Unfortunately, I don’t think it helped me answer any of the above questions¹.

Wallace rose to prominence in the 1990s with the groundbreaking (and massive) novel Infinite Jest, which quickly made a timely jump onto lists of the 100 best novels of the 20th century.   Shortly after its publication, Harper’s asked him to write a travel essay about a one week excursion on a Caribbean luxury liner.  So in March 1995, he booked a 7-Night Caribbean Cruise on the Zenith, a colossal white 47 ton ship owned by Celebrity Cruises Inc.

This lengthy essay describes Wallace’s subsequent seaborne week in great detail, embarking from Fort Lauderdale and cruising much of the western Caribbean.  He carefully critiques the food and accommodations, the restaurant wait staff, the housecleaners – even the towel guys – making numerous friends and enemies along the way.  When he’s not assessing the finer points of the showerhead in his bathroom or describing his efforts at skeet shooting on the poop deck, he reveals much about the cruise ship industry, including a psychologically wide ranging analysis of their finely honed marketing strategies. 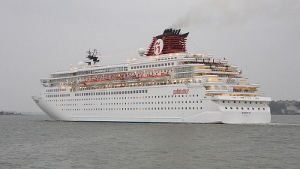 While the actual story itself lacks any significant pizazz, it’s Wallace’s writing style that grabs most of my attention.  He uses a vocabulary not meant for mere mortals.  With myriad polysyllabic words that only an English major could love and an abundance of wacky neologisms, the New Oxford American Dictionary on my Kindle is still trying to recover.  Throw in a constant barrage of footnotes² and Wallace consistently provides an inimitably convoluted ride, even if he’s just writing about the mint on his pillow.

But is it funny?  Maybe it was fifteen years ago when his unique style was undoubtedly more groundbreaking, but much of his humor seems forced to me and overall it leaves me with a rather negative vibe.  To be honest, I have to say that Wallace’s subsequent suicide in 2008 probably has a significant impact on my assessment, particularly when he makes light of his own – and other passenger’s – mental health problems.

In the end, A Supposedly Fun Thing I’ll Never Do Again is a one-of-a-kind look at the Caribbean cruise industry of the 1990s by an undeniably bright, gifted and influential writer who died too young³.   While I didn’t enjoy it as much as I hoped to, I’m not averse to giving some of Wallace’s other work a try in the future.

¹But I did get good at reading footnotes.