I don’t really keep track, but every so often I finish a book and realize that it’s been a long time since I’ve read something so good.  Looking back, it’s been at least six months since I enjoyed a book as much as Incognito, David Eagleman’s exploration of the human brain.  One might be 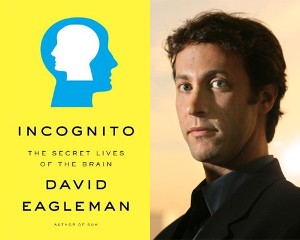 skeptical to think that anyone could adequately encompass the most complex structure in the known universe in just over 200 pages, but the author has created a concise and truly riveting tale, focusing on one particular aspect.  The disconcerting idea that you’re really not in charge.

An apt analogy goes back to the geocentric view of the heavens that was overturned by Copernicus and Galileo.   Earth’s demotion to small planet orbiting an average star in one arm of giant galaxy is mirrored in brain researchers’ gradual realization that most of our thinking goes on beneath the surface, infrequently rising to consciousness, if not  actively suppressed.  The conscious mind is only a small interested bystander inside the vast interconnected neural web that is the brain.

Eagleman – a neuroscientist at Baylor College of Medicine – provides plenty of evidence to back up his thesis, discussing why consciousness became necessary during our evolutionary past.  The basic idea is that our brains need to perform many simultaneous functions to live, eat, mate, raise offspring and avoid predators.  If every neurologic process required conscious input, our minds would rapidly become overwhelmed.

Roger Federer is a fine example.  If he had to actually think about each forehand and backhand, he’d be lousy.   The surest way for him to screw up his serve is to think too much about it.  Endless practice allows athletes or performers to coordinate and hard wire their neural functions so that when they’re “in the zone” they can produce a peak performance without “choking” by thinking too much.  This is why it seems silly to ask Mariano Rivera how to throw a perfect cut fastball or to expect Usain Bolt to deliver a lecture on “How to Run Really Fast”.  They can’t tell you because they 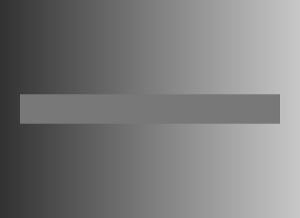 The gradient optical illusion. The bar is the same color throughout.

don’t really know.  Mere mortals perform similar complicated actions when they drive a car or ride a bike without really thinking about it, often struggling to accurately describe what they’re doing.

While the above examples seem sort of straightforward, the generalization of the idea to the rest or our lives is much more counterintuitive.  Eagleman argues that the brain seems to have a Wizard of Oz prime directive.  Its job is to provide a seamless experience and to fill in any gaps in sensory input, creating the illusion that the conscious mind is in charge.  However, using various tricks and plenty of functional MRI scans, researchers are gaining access and have been allowed to take some peaks behind the curtain.  It’s like The Matrix inside your skull.

If one accepts the idea that our conscious mind only has a small role to play in our decision making, there are endless disturbing consequences.  Ideas such as free will, personal identity and responsibility become much more perplexing.   Eagleman fearlessly explores these areas and discusses how this may impact areas like criminal law in the future.  How can we blame someone for committing a crime if their brain isn’t really controlled by their mind?

Incognito is exactly what science writing should be – fascinating science combined with great writing, ideally by an actual scientist.  Strongly recommended for anyone who enjoys top notch science writing or who wants to know more about their brain.  Don’t bother to think too much, just read it.  You may not really have a say in the matter.