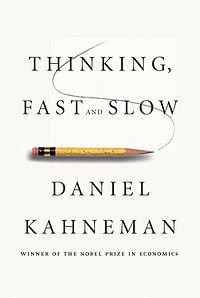 Despite what you see on TV or read in the newspaper, humans are generally considered to be rational creatures.  We use our senses to gather information and respond in ways that best serve our interests.  This belief in our rationality has helped form much of the basis for modern science, economics and politics.  However, recent discoveries in psychology have begun to reveal that this belief may be more illusion than reality.  Maybe our brains go out of their way to convince us that we’re rational, even when we’re not.   In Thinking, Fast and Slow, psychologist Daniel Kahneman explores this changing view of the human mind.

Why do most people say that they’re better than average drivers?

Would you rather win $100 if a coin flip comes up heads rather than tails, or just take $46 for sure?

Why is a professional golfer who performs really well on the first day of a tournament always more likely to shoot a higher score the next day?

How do people judge how unpleasant their colonoscopy was?

How do people decide if they’re happy?

Kahneman, winner of the Nobel Prize in Economic Sciences in 2002, has produced ground breaking work for decades, intertwining the fields of psychology and economics into the new field of behavioral economics.  In this book he summarizes much of his work with the late Amos Tversky, his partner in this often contentious field.

The author has spent most of his career exploring the patterns that emerge when the flaws in human rationality are exposed.  Based on countless shrewdly constructed psychological surveys, Kahneman has developed a model that divides brain function into two systems, conveniently named System 1 and System 2.  The former is fast and intuitive, constantly surveying the environment for unexpected developments, making snap judgments in order to keep you alive.  Much of System 1’s work doesn’t even rise to the level of full consciousness, allowing you to use your brain for other tasks like enjoying a Three Stooges movie or savoring a plate full of Twinkies.   System 1 is also very efficient, processing loads of data quickly and accurately, however its worrisome weakness is a persistent desire to make sure you think everything is ok.  It’s reluctant to admit when it’s in over its head and doesn’t like to ask for help from System 2.

System 2 kicks in when asked and is necessary when you actually have to think about something, like the answer to 17 times 24.  When you’re doing something new, trying to figure out how to get along with your boss or deciding whether to buy a Corolla or a Prius, you call on System 2 to analyze the choices.   This system is slower and is easily confounded by distractions as it tries to decide amongst the many intuitive suggestions System 1 offers it.  It also has a worrisome weakness which is a tendency toward laziness.  It would much rather let System 1 do all the busy work and will only intervene if prodded.  It’s often a bit too willing to endorse System 1’s recommendations.

Over four hundred engaging pages, Kahneman explores this two system model of the brain and all its permutations and ramifications, arguing that when humans behave in non-rational ways, System 1’s hubris or System 2’s laziness is often to blame.

The author writes in a very readable style and the countless complex mental puzzles and conundrums he presents make for a frequently mind bending excursion.   He covers a lot of ground and the foliage gets quite dense at times which is why I found the few summary bullet points that he provides at the end of each of 38 chapters to be very helpful.

Books about the human mind seem to be increasingly popular recently and I’ve read quite a few of them, but Thinking, Fast and Slow covers ground that I haven’t encountered elsewhere.   If you’re interested in the modern psychological approach to human behavior from one of the giants in the field, you’ll enjoy this intriguing and well written book.

Dave’s other reviews of books about the human brain: