Piece of the Sun, A

We rely on it every day, even if we may not think about it much.  A burning hot ball of mostly hydrogen plasma, our sun is the ultimate source of most of our light, food and energy and other stars like it are where the atoms that make up everything around us were forged.  Producing massive amounts of energy by simply slamming hydrogen ions together at high temperatures, scientists have found the sun tantalizing as the world has become increasingly strapped for energy resources.  If humans could learn how to mimic the sun’s handiwork, even on a tiny scale, an unlimited source of energy could be the result.  Thus was born the dream of controlled nuclear fusion, a technology that has holds the potential to eliminate humanity’s energy woes forever.  Science writer Daniel Clery tells the fusion story in A Piece of the Sun.

Following the rapid “success” of the Manhattan Project – just three years from initial concept to vaporized Japanese civilians – nuclear scientists were looking for a place to focus their newfound knowledge and technology, hoping for a peaceful goal the next time around.  Capturing the energy released as radioactive uranium decays proved relatively easy and the first nuclear power plant was up and producing electricity just a few years after World War II.  However, while nuclear fission was thought to have legitimate practical value as a power source, nuclear fusion was the where the true idealists focused their efforts.  Using ubiquitous hydrogen – easily obtained from ordinary water – as the fuel and producing massive power with trivial amounts of radioactive waste, fusion was certain to be the power source for the future.  Like a science fiction fantasy. 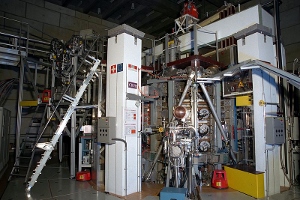 A tokamak reactor in Switzerland.

Unfortunately, fiction and fantasy have proved to be the operative words over the past several decades and Clery starts from the beginning with some of the earliest efforts at plasma control and manipulation, happening simultaneously in Britain, the US and the USSR.  It turns out that simulating the environment of the sun here on earth – at more than ten million degrees Celsius – is more challenging than it first seems.  The author describes how magnetic fields were used to try and control the plasma which melts anything it contacts, making it hard to contain.  He explains some of the basic science, but focuses much of effort on the competition between Cold War adversaries and between labs within the US to lead humanity to energy liberation.   He goes on to explain subsequent technological advances involving giant lasers and high energy neutron beams as scientists struggle to reach the goal of net energy gain.  It takes a lot of energy to start and maintain fusion, but once it gets going it should – theoretically – produce more energy than it requires.

While I’m not a nuclear physicist nor an engineer, I can get as excited about nuclear fusion as any science nerd, so I’m disappointed to report that despite the “hot” topic, this book left me cold.  Much more about the process – lab directors, budgets, meetings and international bickering – than the actual science or the passion behind it, I found most of the book dull.  All the interesting stuff would have fit nicely into a National Geographic cover story, rather than a 300 page book.  Clery has plenty of thought-provoking things to say about nuclear fusion and its tenuous future, unfortunately he saves them all for the last few pages.  Throughout the book, his interest and enthusiasm for the topic is only dimly apparent and the choices he makes are frequently hard to fathom.  Given that hundreds of brilliant people have been involved in this international project over the past sixty-some years, I find it hard to believe that there aren’t better stories to tell or more eccentric characters to feature.  Instead, Cleary spends pages detailing how various countries are going to divvy up the budget for the next massive reactor.  I’m no Einstein, but I do know that international science budget squabbles always equals boring.

It’s hard not to be enthusiastic and idealistic about a limitless source of pollution free energy.  But despite much effort, fusion reality has been hard pressed to meet fusion fantasy.  While A Piece of the Sun explains why the goal of a fusion power plant has proved so elusive, in the end it’s a disappointing history of what should be a fascinating topic.  Not recommended, even for science nerds.