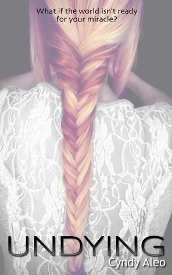 I love supernatural stories.  There’s such freedom in being able to throw the laws of physics (or whatever law you choose) out the window and wrapping your tale in the fantastic.  But that leads to most supernatural stories taking place either in a supernatural universe or in isolation – you get to have your cake and eat it without reality destroying the buzz.  But what if something truly supernatural happened in our universe, the one where these things aren’t the norm?  That’s when you get Undying.

Author Cyndy Aleo sets Undying in the here and now, firmly grounded in the regular world – the one where people have jobs, get married and sometimes watch a loved one die an untimely death.  Cameron Tattersall is one of the unlucky ones – he has just endured a horrific year of watching his beloved wife wither and die a painful death from cancer.  He manages to get through the funeral, but he’s devastated.  He wants to be alone with his grief.  Imagine his surprise when he comes downstairs on that first awful morning expecting only quiet and loneliness to find his recently deceased wife Adrienne about to cook breakfast.  The picture of health.  What the hell?

I love the idea of Undying.  I have wondered, in my many years of reading horror and paranormal and supernatural and all varieties of weirdness, what would happen if the characters had to deal with the real world on top of their supernatural shenanigans.  In this world as presented they have to do exactly that.  Cam and Adrienne don’t just get to play detective and try to find out what’s happening, they also have to deal with hostile relatives, the hungry media and things like how to undo a death certificate.

That’s the biggest strength of the book – its firm footing in our world and how that can warp something amazing and remarkable into something unwieldy and isolating.  Cam and Adrienne are well developed, likable characters whose individual personalities do not outweigh their situation.  They’re just normal people in a distinctly abnormal situation.  I especially liked how their relationship was altered, both by the nature of Adrienne being brought back from the dead and by the pressures of dealing with that fact.  Their initial glee, followed by the inability to just return to “normal” felt very real – unusual for a book about resurrection.

In the interest of full disclosure, I know this author.  I’ve not met her in person, but we’ve been acquaintances in the virtual world for years.  I’ve always liked the way she writes and that hasn’t changed.  Did that effect how I saw Undying?  I don’t know – that’s up to you to decide.  I only know that I really enjoyed the book and blazed through it, wanting to find out what would happen next.  4 out of 5 stars for Undying, with a solid recommendation for fans of the supernatural.