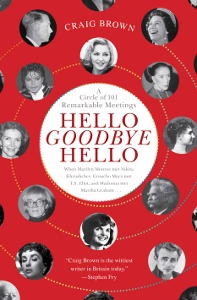 There are 101 famous people in this book.  Most of them never met each other.  But by cleverly stringing them together, one pair at a time, writer Craig Brown has created a unique chain of meetings, entitled Hello, Goodbye, Hello.  Some of the encounters are of great historical significance; some are just humorous; while others are simply decadent.

The book starts off with a bang when best-selling author Adolph Hitler, striding along a Munich walkway on a beautiful summer day in 1931, meets British noble John Scott-Ellis, after the latter knocks down the former with his brand new red Fiat.  In the next chapter, Scott-Ellis meets Rudyard Kipling who meets Mark Twain in the following chapter.   And so it goes for a series of 101 meetings, finishing up with a description of the Duchess of Windsor’s meeting with The Fuhrer in 1937.

In between the Hitler bookends, the clever Craig Brown – a noted British satirist, most famous for his work in Private Eye – has strung together a remarkable series of connections that might make readers think of Kevin Bacon.  In just three steps he bounces from Paul McCartney to Rasputin and later on, in another three steps, he jumps from Leo Tolstoy to Harpo Marx.  Just to make the endeavor more challenging, the author limits the description of each meeting to 1,001 words exactly, a restriction that I found equally amusing and obsessive.  Brown describes the encounters as accurately as possible based on various diaries, biographies and memoirs, sometimes having to weigh the veracity of conflicting testimony.

Spanning well over a century of celebrity – 1876 (Tchaikovsky) to the present – the book contains a wide ranging collection of notable meetings between many of the biggest stars of their times and I’m confident that some of resulting essays are sure to intrigue even the most gossip averse reader.  While a number of the British stars included left me a bit clueless at times, Brown provides ten brief biographical essays (each exactly 101 words long) to help the American reader follow along.

Brown’s work is a joy to read.  He writes with impressive agility and is more than happy to skewer his subjects when they are particularly hypocritical or deceitful, making use of numerous footnotes when the 1,001 word limit leaves him feeling constrained.  Highlights for me include:  Mark Twain + Helen Keller, Marilyn Monroe + Nikita Khrushchev, President Nixon + Elvis Presley, Harry Houdini + Theodore Roosevelt and Sergei Rachmaninoff + Harpo Marx.

Unfortunately, a fair proportion of the links are about people I’ve never heard of doing things that I don’t want to know about, making the reading slow at times.   When it wasn’t slow, it often became too gossipy or unpleasantly raunchy.  There’s only so much I can read about debauched celebrity parties and travails before I grow weary.  But as each essay is brief, it’s only a moment until the chain moves on to something completely different.

How do you get from Mark Twain to Madonna in just three steps?  Why through Helen Keller and Martha Graham, of course.  If you want to see sides of Walt Disney, Frank Sinatra, Josef Stalin or Princess Diana that you haven’t seen before, Hello, Goodbye, Hello may be just the book for you.  In the end, it’s an imaginative, well-written peek at the lives of some of the most famous and infamous people in modern history.